Development of a new grading scale for tear ferning 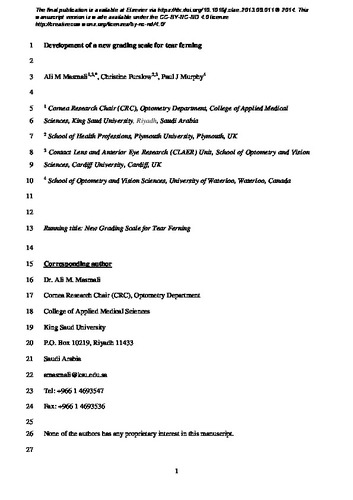 Purpose: This paper reports on the development of a new tear ferning (TF) subjective grading scale, and compares it with the Rolando scale. Method: TF patterns obtained from tear film samples collected from normal and dry eye subjects in previous studies were collated into a large image library. From this library, 60 images were selected to represent the full range of possible TF patterns, and a further sub-set of 15 images was chosen for analysis. Twenty-five optometrists were asked to rank the images in increasing order between extreme anchors on a scale of TF patterns. Interim statistical analysis of this ranking found 7 homogeneous sub-sets, where the image rankings overlapped for a group of images. A representative image (typically the mean) from each group was then adopted as the grade standard. Using this new 7-point grading scale, 25 optometrists were asked to grade the entire 60 image library at two sessions: once using the 4-point Rolando scale and once using the new 7-point scale, applying 0.25 grade unit interpolation. Results: Statistical analysis found that for the larger image set, the Rolando scale produced 3 homogeneous sub-sets, and the 7-point scale produced 5 homogeneous sub-sets. With this refinement, a new 5-point TF scale (Grades 0–4) was obtained. Conclusions: The Rolando grading scale lacks discrimination between its Type I and II grades, reducing its reliability. The new 5-point grading scale is able to differentiate between TF patterns, and may provide additional support for the use of TF for both researcher and clinician.