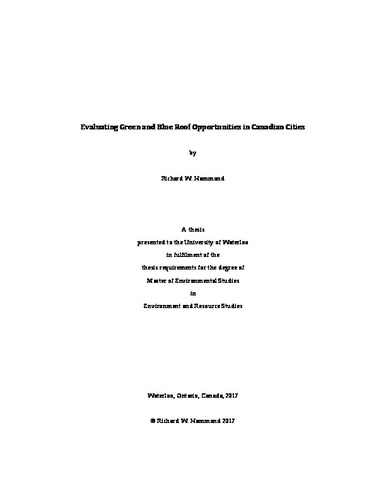 Flat roof surfaces represent a significant proportion of urban areas and perform a variety of functions for buildings, with a corresponding variety of impacts on the urban environment and its infrastructure. One of the most important flat roof functions is the collection and discharge of rainwater, which especially during storms has a substantial impact on municipal sewer systems and the water bodies into which they discharge. The use of vegetated, or ‘green’, roofs has become a prevalent strategy for mitigating the impacts of stormwater runoff from flat roof surfaces in urban areas, including in Canadian cities, and has received a significant amount of research attention. There is also a variety of ‘blue’ roof strategies that involve detention or retention of rainwater, either on roof surfaces or in cisterns. These approaches have received considerably less research attention, particularly for large buildings. This study compares the performance of green and blue roof systems, based on their effectiveness as stormwater management strategies, as well as their life cycle energy, carbon dioxide, and economic impacts. The more qualitative attributes of green and blue roofs are also explored, as well as their compatibility with other rooftop technologies including solar photovoltaic panels, solar thermal hot water heating systems, and high albedo membranes. In this context, the apparently under-appreciated opportunities for rainwater harvesting and reuse inside buildings are examined for a variety of large building types in three Canadian cities with different climatic conditions: Calgary, Alberta, London, Ontario, and Halifax, Nova Scotia. From this investigation, recommended decision criteria are developed for the selection of the most appropriate green or blue roof strategies depending on the characteristics of a particular building project, including its size, occupancy, geographic location, and urban context. Limitations of this study’s methods, as well as issues in need of further research, are also discussed.