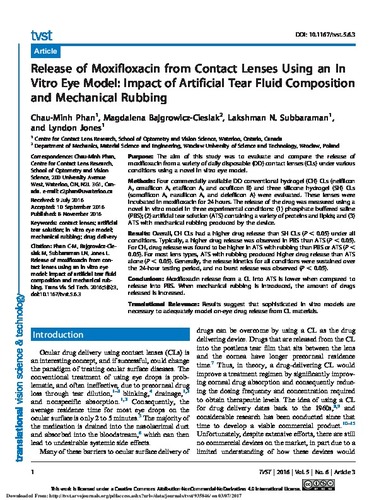 Purpose: The aim of this study was to evaluate and compare the release of moxifloxacin from a variety of daily disposable (DD) contact lenses (CLs) under various conditions using a novel in vitro eye model. Methods: Four commercially available DD conventional hydrogel (CH) CLs (nelfilcon A, omafilcon A, etafilcon A, and ocufilcon B) and three silicone hydrogel (SH) CLs (somofilcon A, narafilcon A, and delefilcon A) were evaluated. These lenses were incubated in moxifloxacin for 24 hours. The release of the drug was measured using a novel in vitro model in three experimental conditions: (1) phosphate buffered saline (PBS); (2) artificial tear solution (ATS) containing a variety of proteins and lipids; and (3) ATS with mechanical rubbing produced by the device. Results: Overall, CH CLs had a higher drug release than SH CLs (P < 0.05) under all conditions. Typically, a higher drug release was observed in PBS than ATS (P < 0.05). For CH, drug release was found to be higher in ATS with rubbing than PBS or ATS (P < 0.05). For most lens types, ATS with rubbing produced higher drug release than ATS alone (P < 0.05). Generally, the release kinetics for all conditions were sustained over the 24-hour testing period, and no burst release was observed (P < 0.05). Conclusions: Moxifloxacin release from a CL into ATS is lower when compared to release into PBS. When mechanical rubbing is introduced, the amount of drugs released is increased. Translational Relevance: Results suggest that sophisticated in vitro models are necessary to adequately model on-eye drug release from CL materials.