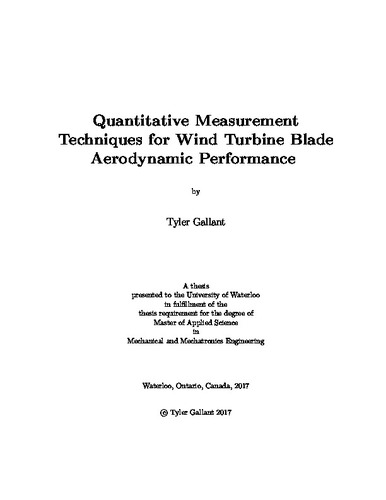 The installed capacity of wind turbines has been growing rapidly in recent years, creating an increased need for accurate measurements and models of wind turbine performance to further their development. There is a need in the literature for experimental data to validate theoretical models and guide turbine blade design. Two related projects were completed to develop measurement techniques and provide such data: the use of a five-hole probe and in-blade data acquisition system to measure the wind turbine blade angle of attack, and the use of tuft flow visualization and a digital image processing algorithm to quantitatively assess the flow direction and behaviour of a wind turbine blade. Experiments were completed at the University of Waterloo Wind Generation Research Facility using a 3.3 m diameter test turbine. Wind speed, rotational speed, shaft torque and angular position were controlled or monitored throughout all experiments. A 3D printed test blade was equipped with a five-hole pressure probe and data acquisition system to measure the flow angles at various radial locations. For tuft flow visualization testing, a separate rotor consisting of three aerodynamic blades was installed, and tufts and a camera were mounted to the surface of one of the blades. Extensive software was developed for controlling instruments and collecting experimental data. The angle of attack and span-wise flow angles were successfully measured as a function of the tip speed ratio, yaw-offset position, radial location and azimuthal position. Variations in the angle of attack with these variables were consistent with wind turbine aerodynamics theory, and results were in close agreement with results calculated using two separate models from the literature. Angle of attack values typically ranged from 7° to 25° throughout the tests, with fluctuations as high as 7°when the wind turbine was yawed. Uncertainty values in the measurements were typically found to be within ±0.2°, which shows great potential for the method. Tuft flow visualization measurements were processed by logging the orientation of each individual tuft, calculating their average orientations and interpolating to develop a contour map of flow direction over the wind turbine blade as a function of tip speed ratio, yaw-position and azimuthal position. Throughout testing, the fraction of tufts indicating stall ranged from 25% to as high as 60% as the tip speed ratio was decreased. Contour maps showed that separation typically formed first on the trailing edge of the blade near the root, and expanded towards the leading edge and tip. This pattern is in agreement with trends found for similar blades in the literature.