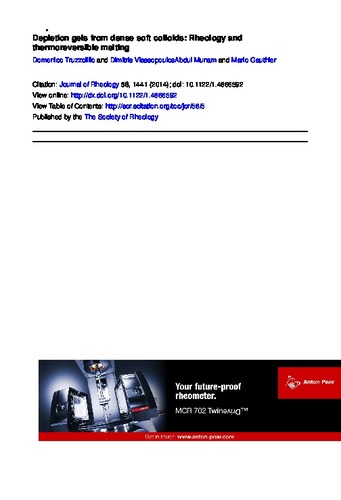 Upon addition of small nonadsorbing linear polymers, colloidal glasses composed of large hard spheres melt and eventually revitrify into the so-called attractive glass regime. We show that, when replacing the hard spheres by star polymers representing model soft particles, a reentrant gel is formed. This is the result of compression and depletion of the stars due to the action of the osmotic pressure from the linear homopolymers. The viscoelastic properties of the soft dense gel were studied with emphasis on the shear-induced yielding process, which involved localized breaking of elements with a size of the order of the correlation length. Based on these results, a phenomenological attempt was made at describing the universal rheological features of colloid/nonadsorbing polymer mixtures of varying softness. The star gel was found to undergo thermoreversible melting, despite the fact that conventional hard-sphere depletion gels are invariant to heating. This phenomenon is attributed to the hybrid internal microstructure of the stars, akin to a dry-to-wet brush transition, and is characterized by slow kinetics, on the time scale of the osmotic gel formation process. These results may be useful in finding generic features in colloidal gelation, as well as in the molecular design of new soft composite materials.