Attention orienting by gaze and facial expressions across development 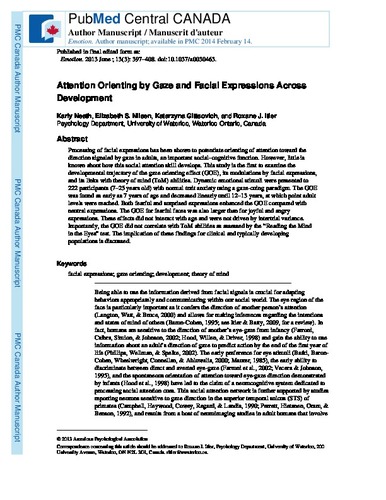 Processing of facial expressions has been shown to potentiate orienting of attention toward the direction signaled by gaze in adults, an important social-cognitive function. However, little is known about how this social attention skill develops. This study is the first to examine the developmental trajectory of the gaze orienting effect (GOE), its modulations by facial expressions, and its links with theory of mind (ToM) abilities. Dynamic emotional stimuli were presented to 222 participants (7-25 years old) with normal trait anxiety using a gaze-cuing paradigm. The GOE was found as early as 7 years of age and decreased linearly until 12-13 years, at which point adult levels were reached. Both fearful and surprised expressions enhanced the GOE compared with neutral expressions. The GOE for fearful faces was also larger than for joyful and angry expressions. These effects did not interact with age and were not driven by intertrial variance. Importantly, the GOE did not correlate with ToM abilities as assessed by the "Reading the Mind in the Eyes" test. The implication of these findings for clinical and typically developing populations is discussed.