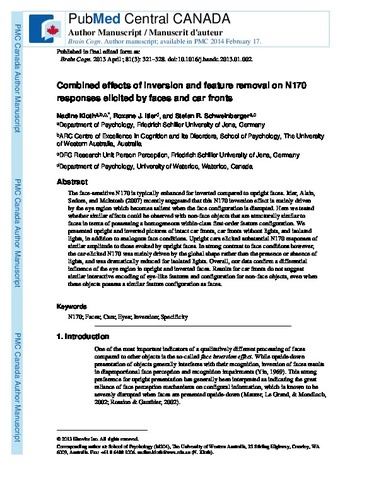 The face-sensitive N170 is typically enhanced for inverted compared to upright faces. Itier, Alain, Sedore, and McIntosh (2007) recently suggested that this N170 inversion effect is mainly driven by the eye region which becomes salient when the face configuration is disrupted. Here we tested whether similar effects could be observed with non-face objects that are structurally similar to faces in terms of possessing a homogeneous within-class first-order feature configuration. We presented upright and inverted pictures of intact car fronts, car fronts without lights, and isolated lights, in addition to analogous face conditions. Upright cars elicited substantial N170 responses of similar amplitude to those evoked by upright faces. In strong contrast to face conditions however, the car-elicited N170 was mainly driven by the global shape rather than the presence or absence of lights, and was dramatically reduced for isolated lights. Overall, our data confirm a differential influence of the eye region in upright and inverted faces. Results for car fronts do not suggest similar interactive encoding of eye-like features and configuration for non-face objects, even when these objects possess a similar feature configuration as faces.