Is the rapid adaptation paradigm too rapid? Implications for face and object processing 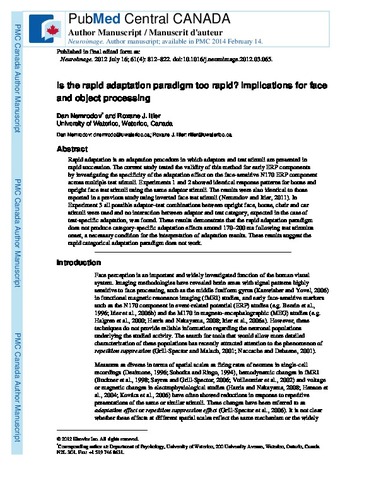 Rapid adaptation is an adaptation procedure in which adaptors and test stimuli are presented in rapid succession. The current study tested the validity of this method for early ERP components by investigating the specificity of the adaptation effect on the face-sensitive N170 ERP component across multiple test stimuli. Experiments 1 and 2 showed identical response patterns for house and upright face test stimuli using the same adaptor stimuli. The results were also identical to those reported in a previous study using inverted face test stimuli (Nemrodov and Itier, 2011). In Experiment 3 all possible adaptor-test combinations between upright face, house, chair and car stimuli were used and no interaction between adaptor and test category, expected in the case of test-specific adaptation, was found. These results demonstrate that the rapid adaptation paradigm does not produce category-specific adaptation effects around 170-200 ms following test stimulus onset, a necessary condition for the interpretation of adaptation results. These results suggest the rapid categorical adaptation paradigm does not work.