The role of eyes in early face processing: a rapid adaptation study of the inversion effect. 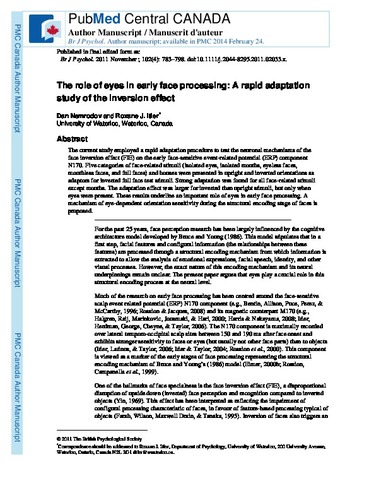 The current study employed a rapid adaptation procedure to test the neuronal mechanisms of the face inversion effect (FIE) on the early face-sensitive event-related potential (ERP) component N170. Five categories of face-related stimuli (isolated eyes, isolated mouths, eyeless faces, mouthless faces, and full faces) and houses were presented in upright and inverted orientations as adaptors for inverted full face test stimuli. Strong adaptation was found for all face-related stimuli except mouths. The adaptation effect was larger for inverted than upright stimuli, but only when eyes were present. These results underline an important role of eyes in early face processing. A mechanism of eye-dependent orientation sensitivity during the structural encoding stage of faces is proposed.