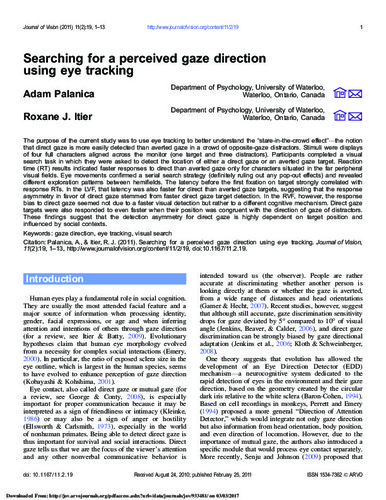 The purpose of the current study was to use eye tracking to better understand the “stare-in-the-crowd effect”—the notion that direct gaze is more easily detected than averted gaze in a crowd of opposite-gaze distractors. Stimuli were displays of four full characters aligned across the monitor (one target and three distractors). Participants completed a visual search task in which they were asked to detect the location of either a direct gaze or an averted gaze target. Reaction time (RT) results indicated faster responses to direct than averted gaze only for characters situated in the far peripheral visual fields. Eye movements confirmed a serial search strategy (definitely ruling out any pop-out effects) and revealed different exploration patterns between hemifields. The latency before the first fixation on target strongly correlated with response RTs. In the LVF, that latency was also faster for direct than averted gaze targets, suggesting that the response asymmetry in favor of direct gaze stemmed from faster direct gaze target detection. In the RVF, however, the response bias to direct gaze seemed not due to a faster visual detection but rather to a different cognitive mechanism. Direct gaze targets were also responded to even faster when their position was congruent with the direction of gaze of distractors. These findings suggest that the detection asymmetry for direct gaze is highly dependent on target position and influenced by social contexts.