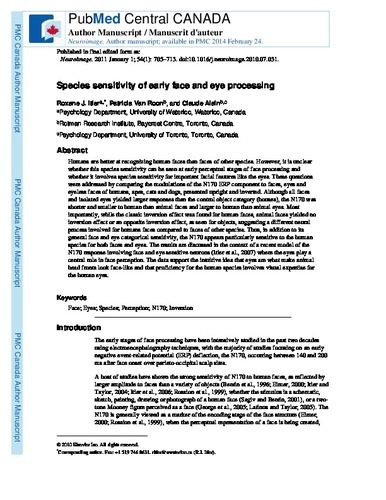 Humans are better at recognizing human faces than faces of other species. However, it is unclear whether this species sensitivity can be seen at early perceptual stages of face processing and whether it involves species sensitivity for important facial features like the eyes. These questions were addressed by comparing the modulations of the N170 ERP component to faces, eyes and eyeless faces of humans, apes, cats and dogs, presented upright and inverted. Although all faces and isolated eyes yielded larger responses than the control object category (houses), the N170 was shorter and smaller to human than animal faces and larger to human than animal eyes. Most importantly, while the classic inversion effect was found for human faces, animal faces yielded no inversion effect or an opposite inversion effect, as seen for objects, suggesting a different neural process involved for humans faces compared to faces of other species. Thus, in addition to its general face and eye categorical sensitivity, the N170 appears particularly sensitive to the human species for both faces and eyes. The results are discussed in the context of a recent model of the N170 response involving face and eye sensitive neurons (Itier et al., 2007) where the eyes play a central role in face perception. The data support the intuitive idea that eyes are what make animal head fronts look face-like and that proficiency for the human species involves visual expertise for the human eyes.