Early sensitivity for eyes within faces: A new neuronal account of holistic and featural processing 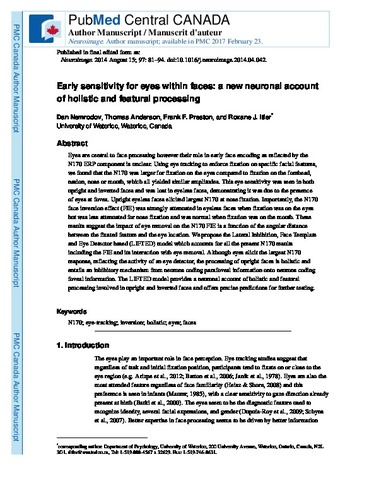 Eyes are central to face processing however their role in early face encoding as reflected by the N170 ERP component is unclear. Using eye tracking to enforce fixation on specific facial features, we found that the N170 was larger for fixation on the eyes compared to fixation on the forehead, nasion, nose or mouth, which all yielded similar amplitudes. This eye sensitivity was seen in both upright and inverted faces and was lost in eyeless faces, demonstrating it was due to the presence of eyes at fovea. Upright eyeless faces elicited largest N170 at nose fixation. Importantly, the N170 face inversion effect (FIE) was strongly attenuated in eyeless faces when fixation was on the eyes but was less attenuated for nose fixation and was normal when fixation was on the mouth. These results suggest the impact of eye removal on the N170 FIE is a function of the angular distance between the fixated feature and the eye location. We propose the Lateral Inhibition, Face Template and Eye Detector based (LIFTED) model which accounts for all the present N170 results including the FIE and its interaction with eye removal. Although eyes elicit the largest N170 response, reflecting the activity of an eye detector, the processing of upright faces is holistic and entails an inhibitory mechanism from neurons coding parafoveal information onto neurons coding foveal information. The LIFTED model provides a neuronal account of holistic and featural processing involved in upright and inverted faces and offers precise predictions for further testing.