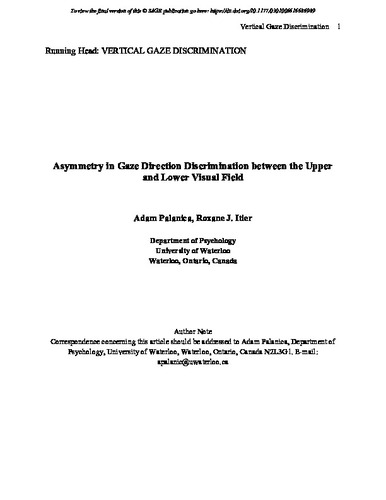 Previous research has shown that gaze direction can only be accurately discriminated within parafoveal limits (∼5° eccentricity) along the horizontal visual field. Beyond this eccentricity, head orientation seems to influence gaze discrimination more than iris cues. The present study examined gaze discrimination performance in the upper visual field (UVF) and lower visual field (LVF), and whether head orientation affects gaze judgments beyond parafoveal vision. Direct and averted gaze faces, in frontal and deviated head orientations, were presented for 150 ms along the vertical meridian while participants maintained central fixation during gaze discrimination judgments. Gaze discrimination was above chance level at all but one eccentricity for the two gaze-head congruent conditions. In contrast, for the incongruent conditions, gaze was discriminated above chance only from -1.5° to +3°, with an asymmetry between the UVF and LVF. Beyond foveal vision, response rates were biased toward head orientation rather than iris eccentricity, occurring in the LVF for both head orientations, and in the UVF for frontal head views. These findings suggest that covert processing of gaze direction involves the integration of eyes and head cues, with congruency of these two social cues driving response differences between the LVF and the UVF.