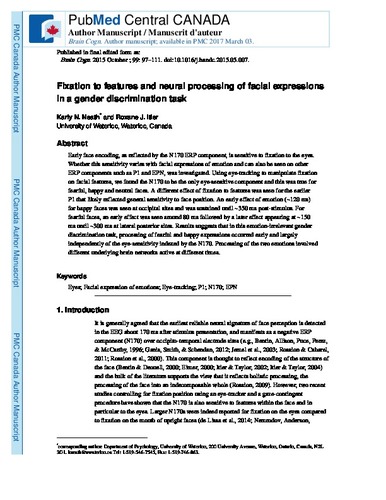 Early face encoding, as reflected by the N170 ERP component, is sensitive to fixation to the eyes. Whether this sensitivity varies with facial expressions of emotion and can also be seen on other ERP components such as P1 and EPN, was investigated. Using eye-tracking to manipulate fixation on facial features, we found the N170 to be the only eye-sensitive component and this was true for fearful, happy and neutral faces. A different effect of fixation to features was seen for the earlier P1 that likely reflected general sensitivity to face position. An early effect of emotion (∼120 ms) for happy faces was seen at occipital sites and was sustained until ∼350 ms post-stimulus. For fearful faces, an early effect was seen around 80 ms followed by a later effect appearing at ∼150 ms until ∼300 ms at lateral posterior sites. Results suggests that in this emotion-irrelevant gender discrimination task, processing of fearful and happy expressions occurred early and largely independently of the eye-sensitivity indexed by the N170. Processing of the two emotions involved different underlying brain networks active at different times.