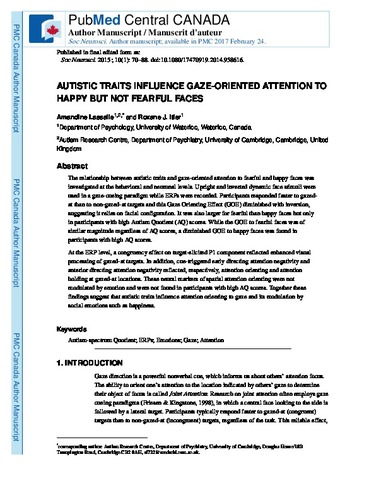 The relationship between autistic traits and gaze-oriented attention to fearful and happy faces was investigated at the behavioral and neuronal levels. Upright and inverted dynamic face stimuli were used in a gaze-cueing paradigm while event related potentials (ERPs) were recorded. Participants responded faster to gazed-at than to non-gazed-at targets, and this gaze orienting effect (GOE) diminished with inversion, suggesting it relies on facial configuration. It was also larger for fearful than happy faces but only in participants with high autism-spectrum quotient (AQ) scores. While the GOE to fearful faces was of similar magnitude regardless of AQ scores, a diminished GOE to happy faces was found in participants with high AQ scores. At the ERP level, a congruency effect on target-elicited P1 component reflected enhanced visual processing of gazed-at targets. In addition, cue-triggered early directing attention negativity and anterior directing attention negativity reflected, respectively, attention orienting and attention holding at gazed-at locations. These neural markers of spatial attention orienting were not modulated by emotion and were not found in participants with high AQ scores. Together, these findings suggest that autistic traits influence attention orienting to gaze and its modulation by social emotions such as happiness.