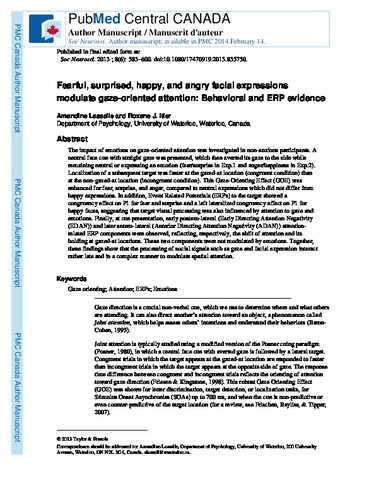 The impact of emotions on gaze-oriented attention was investigated in non-anxious participants. A neutral face cue with straight gaze was presented, which then averted its gaze to the side while remaining neutral or expressing an emotion (fear/surprise in Exp.1 and anger/happiness in Exp.2). Localization of a subsequent target was faster at the gazed-at location (congruent condition) than at the non-gazed-at location (incongruent condition). This Gaze-Orienting Effect (GOE) was enhanced for fear, surprise, and anger, compared to neutral expressions which did not differ from happy expressions. In addition, Event Related Potentials (ERPs) to the target showed a congruency effect on P1 for fear and surprise and a left lateralized congruency effect on P1 for happy faces, suggesting that target visual processing was also influenced by attention to gaze and emotions. Finally, at cue presentation, early postero-lateral (Early Directing Attention Negativity (EDAN)) and later antero-lateral (Anterior Directing Attention Negativity (ADAN)) attention-related ERP components were observed, reflecting, respectively, the shift of attention and its holding at gazed-at locations. These two components were not modulated by emotions. Together, these findings show that the processing of social signals such as gaze and facial expression interact rather late and in a complex manner to modulate spatial attention.