Adsorption of DNA onto gold nanoparticles and graphene oxide: surface science and applications 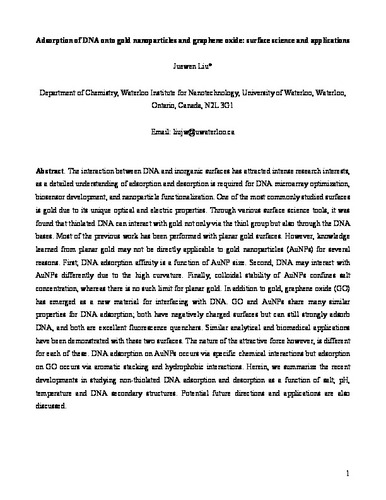 The interaction between DNA and inorganic surfaces has attracted intense research interest, as a detailed understanding of adsorption and desorption is required for DNA microarray optimization, biosensor development, and nanoparticle functionalization. One of the most commonly studied surfaces is gold due to its unique optical and electric properties. Through various surface science tools, it was found that thiolated DNA can interact with gold not only via the thiol group but also through the DNA bases. Most of the previous work has been performed with planar gold surfaces. However, knowledge gained from planar gold may not be directly applicable to gold nanoparticles (AuNPs) for several reasons. First, DNA adsorption affinity is a function of AuNP size. Second, DNA may interact with AuNPs differently due to the high curvature. Finally, the colloidal stability of AuNPs confines salt concentration, whereas there is no such limit for planar gold. In addition to gold, graphene oxide (GO) has emerged as a new material for interfacing with DNA. GO and AuNPs share many similar properties for DNA adsorption; both have negatively charged surfaces but can still strongly adsorb DNA, and both are excellent fluorescence quenchers. Similar analytical and biomedical applications have been demonstrated with these two surfaces. The nature of the attractive force however, is different for each of these. DNA adsorption on AuNPs occurs via specific chemical interactions but adsorption on GO occurs via aromatic stacking and hydrophobic interactions. Herein, we summarize the recent developments in studying non-thiolated DNA adsorption and desorption as a function of salt, pH, temperature and DNA secondary structures. Potential future directions and applications are also discussed.