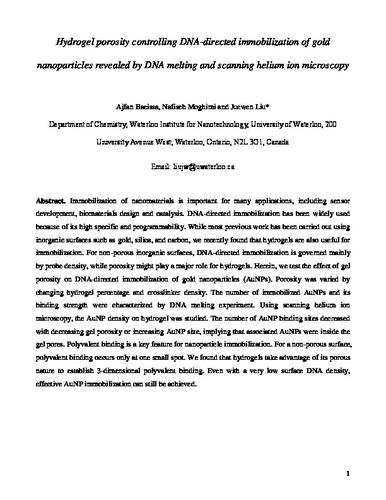 Immobilization of nanomaterials is important for many applications, including sensor development, biomaterials design and catalysis. DNA-directed immobilization has been widely used because of its high specificity and programmability. While most previous work has been carried out using inorganic surfaces such as gold, silica, and carbon, we recently found that hydrogels are also useful for immobilization. For non-porous inorganic surfaces, DNA-directed immobilization is governed mainly by probe density, while porosity might play a major role for hydrogels. Herein, we test the effect of gel porosity on DNA-directed immobilization of gold nanoparticles (AuNPs). Porosity was varied by changing the hydrogel percentage and crosslinker density. The number of immobilized AuNPs and its binding strength were characterized by DNA melting experiments. Using scanning helium ion microscopy, the AuNP density on hydrogel was studied. The number of AuNP binding sites decreased with decreasing gel porosity or increasing AuNP size, implying that the associated AuNPs were inside the gel pores. Polyvalent binding is a key feature for nanoparticle immobilization. For a non-porous surface, polyvalent binding occurs only at one small spot. We found that hydrogels take advantage of its porous nature to establish 3-dimensional polyvalent binding. Even with a very low surface DNA density, effective AuNP immobilization can still be achieved.