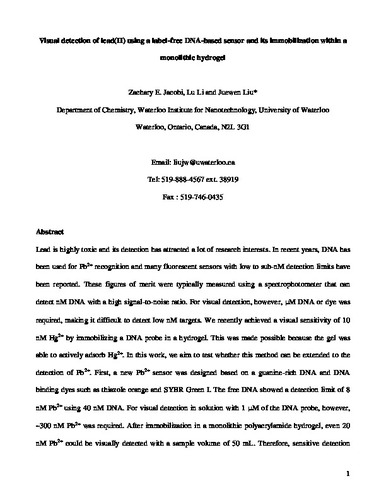 Lead is highly toxic and its detection has attracted a lot of research interests. In recent years, DNA has been used for Pb2+ recognition and many fluorescent sensors with low to sub-nM detection limits have been reported. These figures of merit were typically measured using a spectrophotometer that can detect nM DNA with a high signal-to-noise ratio. For visual detection, however, μM DNA or dye was required, making it difficult to detect low nM targets. We recently achieved a visual sensitivity of 10 nM Hg2+ by immobilizing a DNA probe in a hydrogel. This was made possible because the gel was able to actively adsorb Hg2+. In this work, we aim to test whether this method can be extended to the detection of Pb2+. First, a new Pb2+ sensor was designed based on a guanine-rich DNA and DNA binding dyes such as thiazole orange and SYBR Green I. The free DNA showed a detection limit of 8 nM Pb2+ using 40 nM DNA. For visual detection in solution with 1 μM of the DNA probe, however, ∼300 nM Pb2+ was required. After immobilization in a monolithic polyacrylamide hydrogel, even 20 nM Pb2+ could be visually detected with a sample volume of 50 mL. Therefore, sensitive detection without signal amplification was achieved. Finally, we demonstrated simultaneous detection of both Hg2+ and Pb2+ in the same water sample with shape encoded hydrogel sensors.