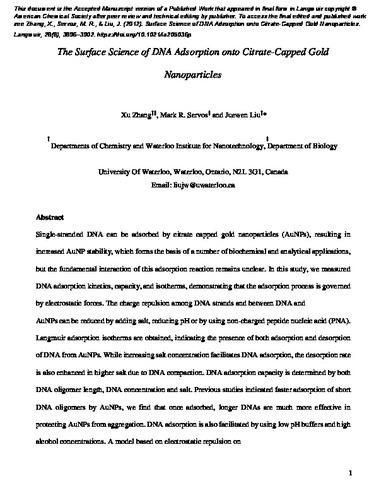 Single-stranded DNA can be adsorbed by citrate capped gold nanoparticles (AuNPs), resulting in increased AuNP stability, which forms the basis of a number of biochemical and analytical applications, but the fundamental interaction of this adsorption reaction remains unclear. In this study, we measured DNA adsorption kinetics, capacity, and isotherms, demonstrating that the adsorption process is governed by electrostatic forces. The charge repulsion among DNA strands and between DNA and AuNPs can be reduced by adding salt, reducing pH or by using noncharged peptide nucleic acid (PNA). Langmuir adsorption isotherms are obtained, indicating the presence of both adsorption and desorption of DNA from AuNPs. While increasing salt concentration facilitates DNA adsorption, the desorption rate is also enhanced in higher salt due to DNA compaction. DNA adsorption capacity is determined by DNA oligomer length, DNA concentration, and salt. Previous studies indicated faster adsorption of short DNA oligomers by AuNPs, we find that once adsorbed, longer DNAs are much more effective in protecting AuNPs from aggregation. DNA adsorption is also facilitated by using low pH buffers and high alcohol concentrations. A model based on electrostatic repulsion on AuNPs is proposed to rationalize the DNA adsorption/desorption behavior.