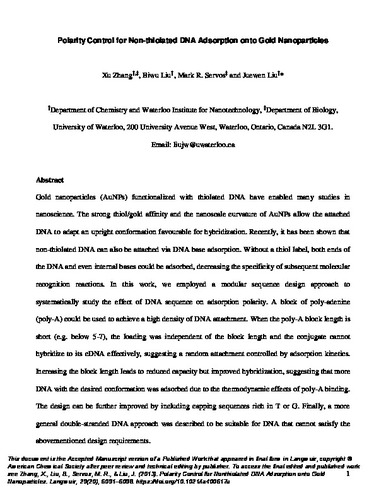 Gold nanoparticles (AuNPs) functionalized with thiolated DNA have enabled many studies in nanoscience. The strong thiol/gold affinity and the nanoscale curvature of AuNPs allow the attached DNA to adapt an upright conformation favorable for hybridization. Recently, it has been shown that nonthiolated DNA can also be attached via DNA base adsorption. Without a thiol label, both ends of the DNA and even internal bases could be adsorbed, decreasing the specificity of subsequent molecular recognition reactions. In this work, we employed a modular sequence design approach to systematically study the effect of DNA sequence on adsorption polarity. A block of poly adenine (poly-A) could be used to achieve a high density of DNA attachment. When the poly-A block length is short (e.g., below 5–7), the loading was independent of the block length, and the conjugate cannot hybridize to its cDNA effectively, suggesting a random attachment controlled by adsorption kinetics. Increasing the block length leads to reduced capacity but improved hybridization, suggesting that more DNA with the desired conformation was adsorbed due to the thermodynamic effects of poly-A binding. The design can be further improved by including capping sequences rich in T or G. Finally, a more general double-stranded DNA approach was described to be suitable for DNA that cannot satisfy the above-mentioned design requirements.