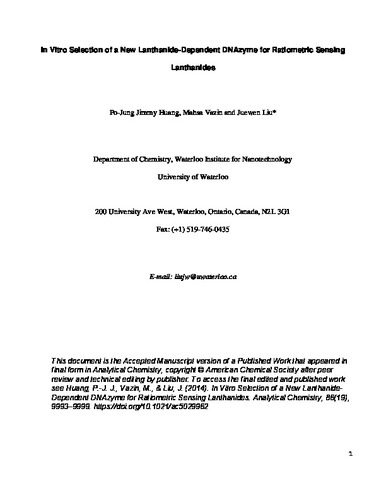 Developing biosensors for lanthanides is an important but challenging analytical task. To address this problem, in vitro selection of RNA-cleaving DNAzymes was carried out using a library containing a region of 35 random nucleotides in the presence of Lu3+, since Lu3+ was reported to be the most efficient lanthanide for RNA cleavage. The resulting DNA sequences can be aligned to a single family with two conserved stretches of nucleotides. One of the representative DNAzymes (named Lu12) was further studied. Lu12 is more active with smaller lanthanides and has the lowest activity in the presence of the largest lanthanide (lutetium). Its cleavage rate is 0.12 min–1 in the presence of 10 μM Nd3+ at pH 6.0. This is a new DNAzyme, and a catalytic beacon sensor is designed by attaching a fluorophore/quencher pair, detecting Nd3+ down to 0.4 nM (72 parts-per-trillion). This DNAzyme is highly selective for lanthanides as well, showing cleavage only with two nonlanthanide ions: Y3+ and Pb2+. We previously reported a DNAzyme named Ce13d, which has similar responses to all the trivalent lanthanides. Combining these two allows for a ratiometric assay that identifies a few large lanthanides.