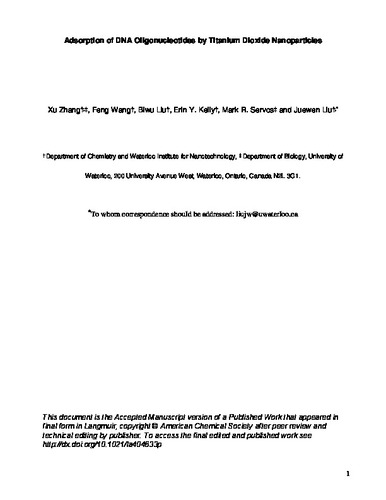 Titanium dioxide (TiO2) or titania shows great promise in detoxification and drug delivery. To reach its full potential, it is important to interface TiO2 with biomolecules to harness their molecular recognition function. To this end, DNA attachment is an important topic. Previous work has mainly focused on long double-stranded DNA or single nucleotides. For biosensor development and targeted drug delivery, it is more important to use single-stranded oligonucleotides. Herein, the interaction between fluorescently labeled oligonucleotides and TiO2 nanoparticles is reported. The point of zero charge (PZC) of TiO2 is around 6 in water or acetate buffer; therefore, the particles are positively charged at lower pH. However, if in phosphate or citrate buffer, the particles are negatively charged, even at pH ∼2, suggesting strong adsorption of buffer anions. DNA adsorption takes place mainly via the phosphate backbone, although the bases might also have moderate contributions. Peptide nucleic acids (PNAs) with an amide backbone cannot be adsorbed. DNA adsorption is strongly affected by inorganic anions, where phosphate and citrate can strongly inhibit DNA adsorption. DNA adsorption is promoted by adding salt or lowering pH. DNA adsorption is accompanied with fluorescence quenching, and double-stranded DNA showed reduced quenching, allowing for the detection of DNA using TiO2 nanoparticles.