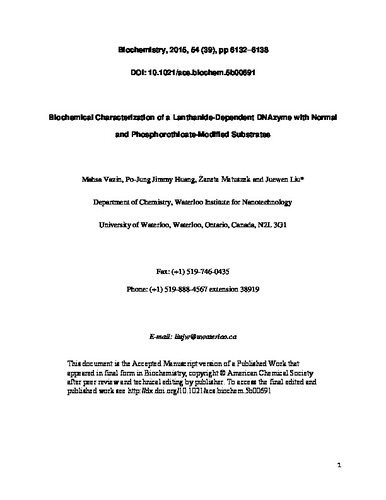 A trivalent lanthanide (Ln3+)-dependent RNA-cleaving DNAzyme, Ce13d, was recently isolated via in vitro selection. Ce13d is active in the presence of all Ln3+ ions. Via introduction of a single phosphorothioate (PS) modification at the cleavage site, its activity with Ln3+ decreases while all thiophilic metals can activate this DNAzyme. This property is unique to Ce13d and is not found in many other tested DNAzymes. This suggests the presence of a well-defined but general metal binding site. Herein, a systematic study of Ce13d with the PO substrate (using Ce3+) and the PS substrate (using Cd2+) is performed. In both the PO and PS systems, the highest activity was with ∼10 μM metal ions. Higher concentrations of Ce3+ completely inhibit the activity, while Cd2+ only slows the activity. A comparison of different metal ions suggests that the role of metal is to neutralize the phosphate negative charge. Both systems follow a similar pH–rate profile with a single deprotonation step, indicating similar reaction mechanisms. The activity difference between the Rp and Sp form of the PS substrate is <10-fold, which is much smaller than most known RNA-cleaving enzymes. Mutation studies identified eight highly conserved purines, among which the two adenines play mainly structural roles, while the guanines are likely to be involved in metal binding. Ce13d can serve as a model system for further understanding of DNAzyme biochemistry and bioinorganic chemistry.