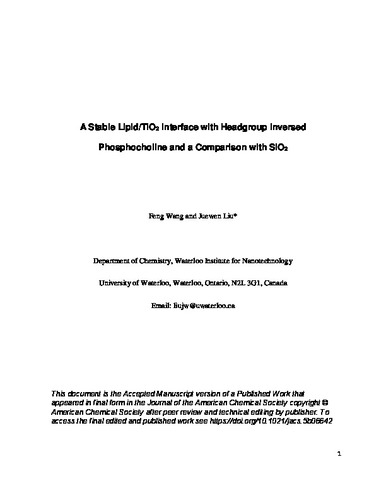 Zwitterionic phosphocholine (PC) lipids are highly biocompatible, representing a major component of the cell membrane. A simple mixing of PC liposomes and silica (SiO2) surface results in liposome fusion with the surface and formation of supported lipid bilayers. However, the stability of this bilayer is relatively low because adsorption is based mainly on weak van der Waals force. PC lipids strongly adsorb by TiO2 via chemical bonding with the lipid phosphate. The lack of fusion on TiO2 is attributable to the steric effect from the choline group in PC. In this study, inverse phosphocholine lipids (CP) are used, directly exposing the phosphate. Using a calcein leakage assay and cryo-TEM, fusion of CP liposome with TiO2 is demonstrated. The stability of this supported bilayer is significantly higher than that of the PC/SiO2 system, as indicated by washing the membrane under harsh conditions. Adsorption of CP liposomes by TiO2 is inhibited at high pH. Interestingly, the CP liposome cannot fuse with silica surface because of a strong charge repulsion. This study demonstrates an interesting interplay between a soft matter surface and metal oxides. By tuning the lipid structure, it is possible to rationally control the interaction force. This study provides an alternative system for forming stable supported bilayers on TiO2, and represents the first example of interfacing inverse lipids with inorganic surfaces.