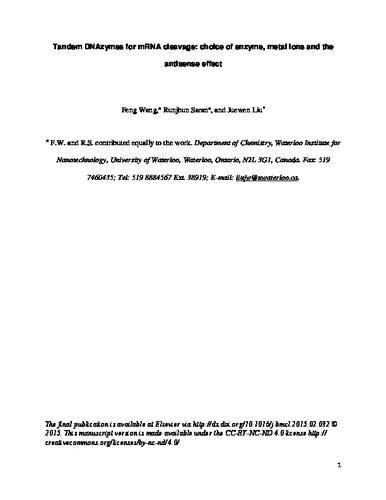 The concept of DNAzyme-based gene silencing via mRNA cleavage was proposed over twenty years ago. A number of studies regarding intracellular gene silencing have been reported as well. However, questions have been raised regarding the lack of enzyme activity in physiological buffer conditions and it is being doubted that in the previously reported studies, gene silencing might be simply due to an antisense effect. In this work, two classical DNAzymes for RNA cleavage are studied using both chimeric substrates and extracted mRNA. We concluded that the activity of the 8–17 DNAzyme is much higher than that of 10–23 in the same conditions. To illustrate and compare the effect of specific cleavage versus antisense effect in the best possible way, we used tandem DNAzymes. Specific mRNA cleavage occurred with Zn2+, while with Mg2+, even the inactive control DNAzymes showed a similar response, suggesting that the antisense effect might be the dominating phenomenon causing gene silencing. This study has thus clarified the choice of DNAzyme sequence, the effect of metal ions and a potential source of antisense effect.