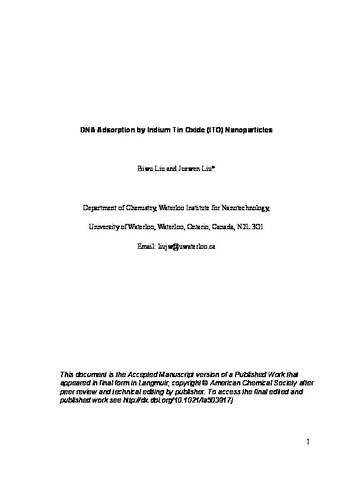 The high conductivity and optical transparency of indium tin oxide (ITO) has made it a popular material in the electronic industry. Recently, its application in biosensors is also explored. To understand its biointerface chemistry, we herein investigate its interaction with fluorescently labeled single-stranded oligonucleotides using ITO nanoparticles (NPs). The fluorescence of DNA is efficiently quenched after adsorption, and the interaction between DNA and ITO NPs is strongly dependent on the surface charge of ITO. At low pH, the ITO surface is positively charged to afford a high DNA adsorption capacity. Adsorption is also influenced by the sequence and length of DNA. For its components, In2O3 adsorbs DNA more strongly while SnO2 repels DNA at neutral pH. The DNA adsorption property of ITO is an averaging result from both components. DNA adsorption is confirmed to be mainly by the phosphate backbone via displacement experiments using free phosphate or DNA bases. Last, DNA-induced DNA desorption by forming duplex DNA is demonstrated on ITO, while the same reaction is more difficult to achieve on other metal oxides including CeO2, TiO2, and Fe3O4 because these particles adsorb DNA more tightly.