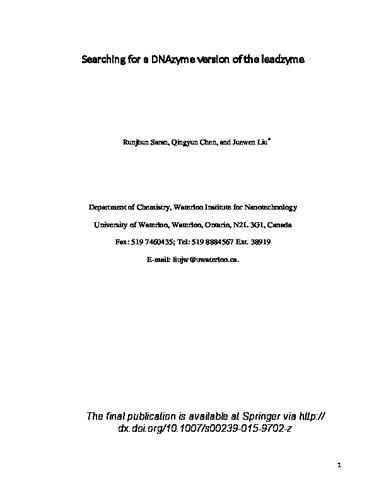 The leadzyme refers to a small ribozyme that cleaves a RNA substrate in the presence of Pb2+. In an optimized form, the enzyme strand contains only two unpaired nucleotides. Most RNA-cleaving DNAzymes are much longer. Two classical Pb2+-dependent DNAzymes, 8–17 and GR5, both contain around 15 nucleotides in the enzyme loop. This is also the size of most RNA-cleaving DNAzymes that use other metal ions for their activity. Such large enzyme loops make spectroscopic characterization difficult and so far no high-resolution structural information is available for active DNAzymes. The goal of this work is to search for DNAzymes with smaller enzyme loops. A simple replacement of the ribonucleotides in the leadzyme by deoxyribonucleotides failed to produce an active enzyme. A Pb2+-dependent in vitro selection combined with deep sequencing was then performed. After sequence alignment and DNA folding, a new DNAzyme named PbE22 was identified, which contains only 5 nucleotides in the enzyme catalytic loop. The biochemical characteristics of PbE22 were compared with those of the leadzyme and the two classical Pb2+-dependent DNAzymes. The rate of PbE22 rises with increase in Pb2+ concentration, being 1.7 h−1 in the presence of 100 μM Pb2+ and reaching 3.5 h−1 at 500 µM Pb2+. The log of PbE22 rate rises linearly in a pH-dependent fashion (20 µM Pb2+) with a slope of 0.74. In addition, many other abundant sequences in the final library were studied. These sequences are quite varied in length and nucleotide composition, but some contain a few conserved nucleotides consistent with the GR5 structure. Interestingly, some sequences are active with Pb2+ but none of them were active with even 50 mM Mg2+, which is reminiscent of the difference between the GR5 and 8–17 DNAzymes.