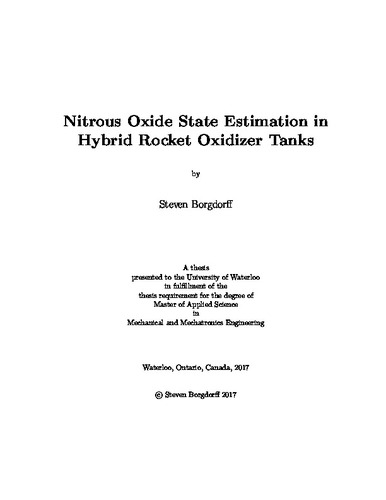 There is an increasing interest in the use of hybrid rockets to accomplish tasks that require precise control of the craft. Fuel is being consumed as the craft is propelled, causing the mass of the rocket to change. In some hybrid rocket architectures, it is not possible to directly measure the mass of the oxidizer while the rocket is in flight. Further, controlling the flow rate of oxidizer is a method employed to control the overall thrust developed by a hybrid rocket. It is therefore important to understand how the changing state of the oxidizer may influence the mass flow rate of the oxidizer. For precise flight trajectory control, accurate estimates of the various states, including the mass of the rocket and remaining propellant are required. Nitrous oxide is frequently selected as an oxidizer as it is relatively safe to store and handle, plus it is self pressurizing. Both of these advantages reduce complexity and cost and increase safety in a rocket program. In theory, the mass of the rocket could be estimated with a very precise model. In practice, such models have not provided a satisfactory level of accuracy when estimating the remaining mass of oxidizer. The goal of this thesis is to accurately estimate the current mass of the oxidizer in the tank over time. The approach to solving this problem uses an Extended Kalman Filter to merge a model of the system states with available measurements of system states. An existing model is selected, analyzed and discussed. It assumes the gas phase of nitrous oxide approximates an ideal gas, and that the gas and liquid phases are saturated in isothermal and isobaric equilibrium. Some alterations to this model are proposed as they are found to increase the accuracy. The changes include a first-order delay in the flow through the injector and the system components included in the modeled thermal mass are modified. The model, and the available measurements are then implemented in an Extended Kalman Filter (EKF). The primary intent of the filter is to dynamically estimate the mass and properties of the oxidizer remaining in the rocket during flight. The EKF relies on updated measurements of the pressure in the oxidizer tank and the combustion chamber. The EKF discussed in this work is designed with the intent the flow rate of oxidizer can be controlled, and a dedicated flow rate control factor is included. However, the hardware for control systems for the mass flow rate are not a focus of this work. The EKF performance is simulated and measured based on data collected from ground testing. An improvement over the use of simulation alone is demonstrated.