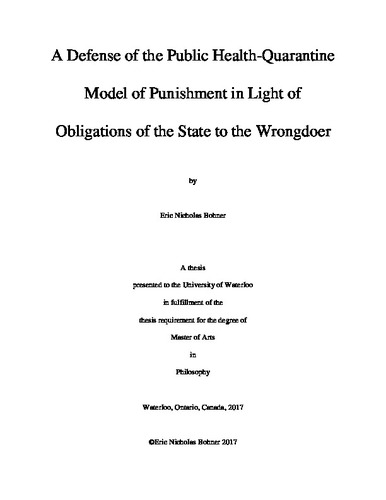 Punishment is traditionally justified retributively or consequentially; that is, with respect to the desert of the wrongdoer or the positive consequences of the punishment. State-sanctioned punishment (the kind of punishment that is administered by the state to those who break the law), I find, cannot be justified in these traditional ways. In the first two chapters of this thesis I take a detailed look at these traditional theories of punishment and point out several strong moral objections which provide reason to believe they do not sufficiently justify punishment. In the next chapter, I argue that punishment can only be morally justified as a last resort of keeping society safe, as described in the Public Health-Quarantine Model of Punishment (PHQ model). That is, punishment can only be justified insofar as it is necessary for ensuring the safety of individuals in a society. Even then, however, I argue in the fourth chapter that the state creates an obligation to the wrongdoer when it punishes her for breaking the law. This obligation, I argue, is best fulfilled by providing every reasonable opportunity to assist with the wrongdoer’s rehabilitation into society. By taking seriously my recommendation of ensuring the health of the wrongdoer, I provide an interpretation of the PHQ model which avoids the “mere means” objection to punishment. That is, it ensures that wrongdoers are not merely used as a means of promoting the general wellbeing of society, but are treated as autonomous individuals who deserve the respect that is required of all people. Most importantly, it ensures that dangerous wrongdoers who are incarcerated for the safety of society are helped as quickly and efficiently as possible, similar to the way in which we are obligated to treat those with dangerously infectious diseases who are quarantined to ensure they cannot unintentionally harm others. By ensuring wrongdoers are treated this way, the PHQ model of punishment cannot lose sight of the needs of the individual in favour of the greater good for society. In that way, my argument that state-sanctioned punishment entails an obligation to the wrongdoers, actually strengthens the PHQ model from some common (and often damning) objections to the justification of punishment.

Eric Nicholas Bohner (2017). A Defense of the Public Health-Quarantine Model of Punishment in Light of Obligations of the State to the Wrongdoer. UWSpace. http://hdl.handle.net/10012/11332