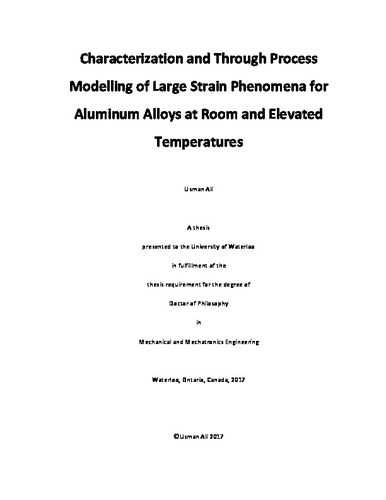 The objective of this research is to model and analyze large strain problems (rolling, hot compression) in FCC polycrystals. In the first part of this research, a rate-dependent crystal plasticity based Element Free Galerkin (CPEFG) model was incorporated in commercial software LS-DYNA to simulate cold rolling of AA 5754. Unlike classical Finite Element Methods, EFG methods are meshless and hence can accommodate large strains. It is well known that rolling produces inhomogeneous microstructure in the through thickness of the sheet. Therefore CPEFG model used in this work accounted for the complete through thickness microstructure in the sheet. Through thickness deformed microstructure and strain distribution obtained from CPEFG simulations were validated with published results. CPEFG simulations provide elemental texture data which can provide insight into the microstructural changes during processing. Therefore, an in-house 3D framework (gCode) was developed. In-house gCode is based on a path finding algorithm and calculates the element neighbors to analyze subgrain formation and other grain metrics. Initial and final grain size in CPEFG rolling simulations was found using the gCode and validated against published experimental data. Results show a marked reduction in subgrain formation down the sheet thickness due to the reduction in shear. Further analysis showed that there was a 8 μm change in grain size between the initial and deformed sheet. However, there was a 7 μm change in grain size between the top and center of the deformed sheet. Thus highlighting the importance of capturing the complete microstructure of the sheet. In-house gCode was also used to study the relationship of grain size and texture across the sheet thickness. It is observed that small grains near the center of the sheet prefer Brass, S and Copper while large grains near the center of the sheet prefer Cube, S and Copper. Plane strain compression is often used to model cold rolling. Therefore, plane strain compression simulations were also performed and predictions from both simulations were compared. Volume fraction evolution of several texture components from the center section of the sheet show similar values between the two processes However, normal strains, shear strains and microstructure evolution near the top section show considerable difference between the two processes. Hence, highlighting the importance of using proper microstructure and boundary conditions for rolling simulations. The second part of this work focuses on through process modelling of hot compression of cast AA 6063. A Taylor based rate-dependent polycrystal crystal plasticity framework was used to predict the texture and stress-strain evolution at various temperatures (from 4000C to 6000C) and strain-rates (from 0.01 𝑠𝑠−1 to 10 𝑠𝑠−1). Crystal plasticity framework was modified to incorporate the effects of temperature and strain-rate. Proposed framework was calibrated, verified and validated with experimental AA 6063 hot compression Gleeble data. Simulated stress-strain results for all temperatures and strain-rates showed good agreement with experimental results. It is known that AA 6xxx alloys undergo static recrystallization at high temperatures. Therefore, a probabilistic integration point based static recrystallization (SRX) code was developed to study the texture and grain size evolution at various temperatures and strain-rates. SRX model used texture and resolved shear stress as inputs to calculate potential nuclei and their growth. After SRX simulations, experimental and simulated texture and grain size results were compared and showed good agreement with minor deviations at different temperatures and strain-rates and also predicted the correct trends.