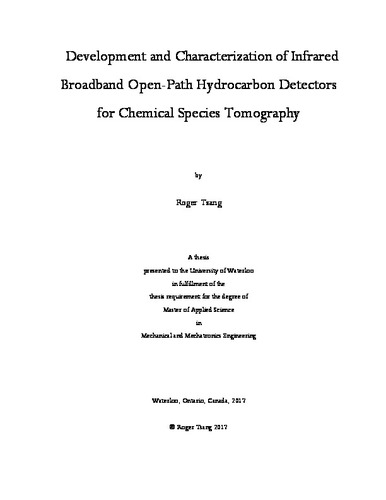 Chemical species tomography (CST) is an emerging diagnostic technique for estimating the spatial distribution of a chemical species of interest. This thesis focuses on using CST to detect and map fugitive hydrocarbon emissions resulting from crude oil refinement, where current methods of detecting and measuring these emissions can be costly and inaccurate. This technique utilizes multiple optical paths to measure path-integrated concentrations over a flow field that are used in reconstructions to obtain an estimated discrete distribution. Prior CST work has made use of diode lasers, ultraviolet differential optical absorption spectrometers, or Fourier transform infrared spectrometers. This thesis pioneers the use of broadband infrared open path detectors for CST. A theoretical background is laid out with a discussion of the fundamentals of how E-M waves interact with gas molecules, which underlies the CST measurement principle. This is followed by an explanation of monochromatic tomography, which involves solving a rank-deficient problem through the context of a Bayesian problem with prior information. Broadband tomography is then developed on that foundation, requiring a transfer function to linearize the problem. Details of a design overview is presented for four open path broadband detector and emitter pairs that were fabricated for use in lab-scale tomography experiments. Focusing on the mid-infrared ro-vibrational band of hydrocarbons at approximately 3.3 µm, the pairs contain optical components suitable for operation at distances up to 10 m. These components include a thermal emitter, a collimating reflector, bandpass filter, focusing lens, and photovoltaic detector. The detector pairs were validated and transfer functions were built with a calibration process through a custom-built absorption cell with gaseous species of methane, propane, and ethylene. Using known concentrations of one species at a time, the transmittance of an optical pair was compared to an expected model that was constructed from spectral data compiled in the HITRAN or PNNL databases. Twelve tomography experiments followed, culminating in a final successful proof-of-concept tomographic reconstruction of a propane plume that was validated with flame ionization detector measurements.