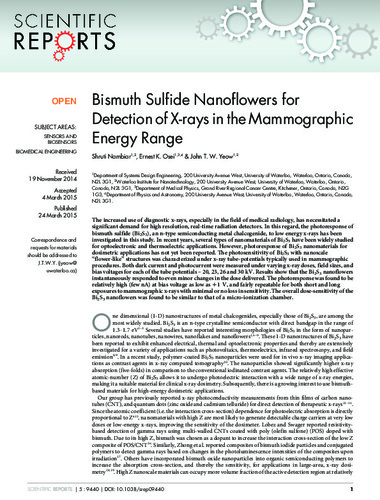 The increased use of diagnostic x-rays, especially in the field of medical radiology, has necessitated a significant demand for high resolution, real-time radiation detectors. In this regard, the photoresponse of bismuth sulfide (Bi2S3), an n-type semiconducting metal chalcogenide, to low energy x-rays has been investigated in this study. In recent years, several types of nanomaterials of Bi2S3 have been widely studied for optoelectronic and thermoelectric applications. However, photoresponse of Bi2S3 nanomaterials for dosimetric applications has not yet been reported. The photosensitivity of Bi2S3 with nanoscale “flower-like” structures was characterized under x-ray tube-potentials typically used in mammographic procedures. Both dark current and photocurrent were measured under varying x-ray doses, field sizes, and bias voltages for each of the tube potentials – 20, 23, 26 and 30 kV. Results show that the Bi2S3 nanoflowers instantaneously responded to even minor changes in the dose delivered. The photoresponse was found to be relatively high (few nA) at bias voltage as low as +1 V, and fairly repeatable for both short and long exposures to mammographic x-rays with minimal or no loss in sensitivity. The overall dose-sensitivity of the Bi2S3 nanoflowers was found to be similar to that of a micro-ionization chamber.