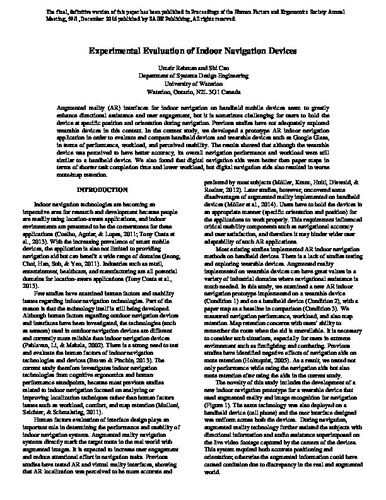 Augmented reality (AR) interfaces for indoor navigation on handheld mobile devices seem to greatly enhance directional assistance and user engagement, but it is sometimes challenging for users to hold the device at specific position and orientation during navigation. Previous studies have not adequately explored wearable devices in this context. In the current study, we developed a prototype AR indoor navigation application in order to evaluate and compare handheld devices and wearable devices such as Google Glass, in terms of performance, workload, and perceived usability. The results showed that although the wearable device was perceived to have better accuracy, its overall navigation performance and workload were still similar to a handheld device. We also found that digital navigation aids were better than paper maps in terms of shorter task completion time and lower workload, but digital navigation aids also resulted in worse route/map retention.