Unearthing the power in GMO discourse: An analysis of Canadian agriculture and agrifood debates 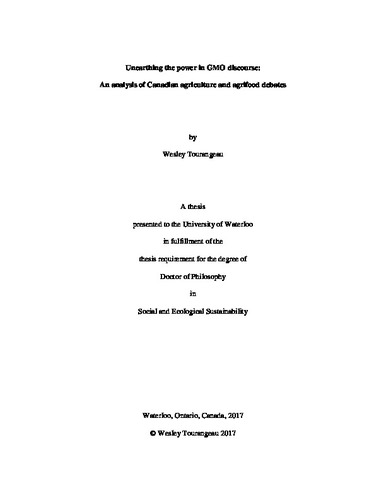 The overall purpose of this doctoral research project is to add to our knowledge and understanding of power relations embedded in discourses regarding Canadian agriculture and agrifood debates. Power can be obscured by discourse, and discourse infiltrates acts of power. The primacy of scientific knowledge, specifically reductionist versions of modern science, in decision-making on genetically modified organisms (GMOs) is a fitting example; science-based information plays a critical role in safety assessments, while also holding a discursive role in the legitimation of GM technology. As such, we need to take a closer look at acts of speaking and writing about GMOs—the complex, historically embedded context of debating over the benefits and risks of agricultural biotechnology through conversations, publicity materials, news media, and other forums. To achieve this more detailed examination, this thesis examines power relations through a broad, multi-dimensional lens, from the immediate and overt interactions of actors engaging in decision-making processes, to the embedded and amorphous influences of social norms and histories. The overarching research question for this study is: In what ways do conceptualizations of power and discourse help to further our understandings of disputes over genetically modified organisms in Canada? This question guides this project through case studies regarding present issues and contexts in Canadian agriculture and agrifood debates, focusing on three different discursive arenas. First, the thesis examines pro-biotech and anti-biotech discourses to add new insights concerning the power relations embedded in efforts to inform public opinion on the topic of agricultural biotechnology. This analysis highlights the Canadian state’s overall positive position toward agricultural biotechnology, which provides leverage to pro-biotech public relations while delimiting anti-biotech campaigns. Further, it illustrates that the potency of pro-biotech frames is sustained by historically and culturally embedded norms and values. These findings uncover a clearer picture of the complexity of power relations within agri-biotech discourse, and the extent to which anti-biotech groups are disadvantaged in these debates. Second, an analysis was performed on the parliamentary proceedings of Bill C-18, Canada’s Agricultural Growth Act, which amended several pieces of agricultural legislation. This article contributes to a broader and more integrated approach to exploring the ways in which power dynamics are articulated in law and policy debates. Discourse analysis of 32 parliamentary documents helps to shed light on a range of patterns regarding relations of power and control in the text and context of these debates. Based on this analysis, I discuss the relations of power which work together in an imbricated manner to produce an imbalanced climate for agriculture and agrifood law and policy development—one that prioritizes economic liberalization, global competitiveness, and private property rights. The third and final case study focuses on news media discourse regarding the introduction of genetically modified alfalfa in Canada. Based on a discourse analysis of 88 news reports on GM alfalfa published over a four year period, this study identifies constitutive power relations that influence the direction of reporting. Specifically, this news coverage is influenced by normative conditions regarding news values and media culture which shape the report writing and editing process, and neoliberal normative assumptions that help to re-embed dominant knowledges regarding market mechanisms and private property rights. This doctoral research project makes contributions to knowledge through an interdisciplinary analysis of power and discourse in Canadian agriculture and agrifood debates. The three case studies offer substantive empirical contributions to the areas of Canadian agriculture and agrifood studies, particularly regarding GMOs. As an interdisciplinary project, this research contributes to literatures across sociology, environmental studies, science and technology studies, and political science. Furthermore, important insights are developed from the fusion of a four-dimensional power framework with methods of discourse analysis. Future research could benefit from an elaboration of the theory-method approach outlined in this study. Discourses and power relations are co-constructed in varied contexts and necessitate an approach that engages with such dynamics.