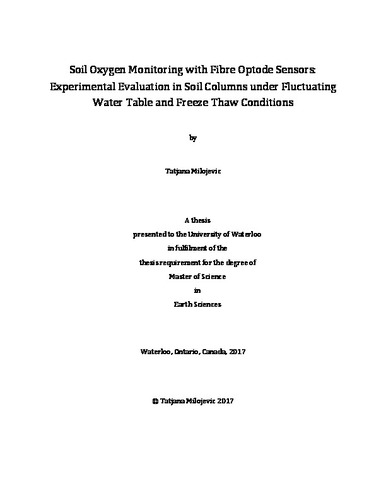 The biogeochemical functioning of natural and engineered environments is closely linked to spatial and temporal variations in molecular oxygen (O2) concentrations. A luminescence-based, Multi-Fibre Optode (MuFO) microsensor technique was developed to measure O2 concentrations in fully and partially water-saturated systems. The technique relies on the conversion of high-resolution digital images of sensor-emitted light into O2 concentrations using the classical Stern-Volmer (SV) and Lehrer equations. The method was tested in two soil column experiments designed to simulate water table fluctuations (WT) and freeze-thaw cycles (FTC) under controlled conditions. The columns were filled with a homogenized mixture of peat (20 %) and sand (80 %). Depth distributions of O2 concentration were monitored without interruption for 20 (WT experiment) and 39 days (FTC experiment), while CO2 effluxes from the soils were measured periodically. Increases in CO2 emission accompanied both thawing (FTC experiment) and water table drawdown (WT experiment). During freezing, O2 levels in the unsaturated depth interval of the soil dropped by up to 20% because of more restricted gas exchanges with the atmosphere. The CO2 pulses in the FTC experiment were therefore attributed to the build-up of respiratory CO2 in the pore space during freezing, and its subsequent release upon thawing. In the WT experiment, the lowering (rate of 12 cm day-1 over 2.5 days) of the water table allowed for O2 migration deeper into the soil, which enhanced the aerobic mineralization of peat organic matter and, consequently, increased the emission of CO2. In both the FTC and WT experiments, the magnitude of the CO2 pulse decreased (from 0.26 μmol2 s-1 to 0.07 μmol2 s-1) with each subsequent water table and freeze-thaw cycle, indicating the progressive depletion of reactive organic carbon. No degradation of optode performance and O2 signals were observed over the entire duration of the experiments, hence supporting the long-term deployment of the microsensors for continuous O2 monitoring in field and laboratory settings.