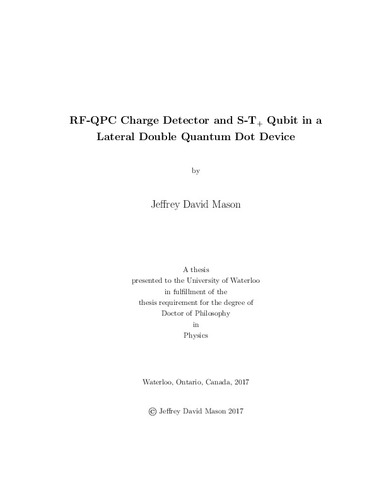 A measurement system is developed for studying a lateral double quantum dot (DQD) device formed in the two-dimensional electron gas (2DEG) of a GaAs/AlGaAs heterostructure. Copper powder and RC filters are constructed to isolate the device from sources of instrumentation and thermal noise, allowing the temperature of the 2DEG to reach 70 mK. Coaxial cables and bias tees allow Gaussian shaped pulses to be delivered to several depletion gates of the device for the purpose of quantum dot qubit manipulation. A conventional charge detector based on a quantum point contact (QPC) and a room temperature current preamplifier is implemented. This readout has a bandwidth of 25 kHz. To improve readout bandwidth, a radio-frequency QPC (RF-QPC) circuit is also developed. A superconducting niobium inductor, manufactured using photolithography techniques, is the basis of a 520 MHz matching network. The RF-QPC system noise temperature is 5.2 K, limited by the cryogenic semiconductor amplifier. The RF-QPC has a bandwidth of 15 MHz. A summary of the first quantum dot physics measurements is provided. Data related to fundamental phenomena such as conductance quantization of a QPC, Coulomb blockade for a single dot, and spin blockade for a DQD are presented. A qubit based on two-electron spin states in a DQD (S-T₊ qubit) is created and coherent oscillations of the qubit known as Landau-Zener-Stückelberg oscillations are observed. Analysis of the spin-to-charge conversion mechanism associated with the qubit readout reveals the role played by metastable charge states, a result published in Physical Review B 92, 125434 (2015).