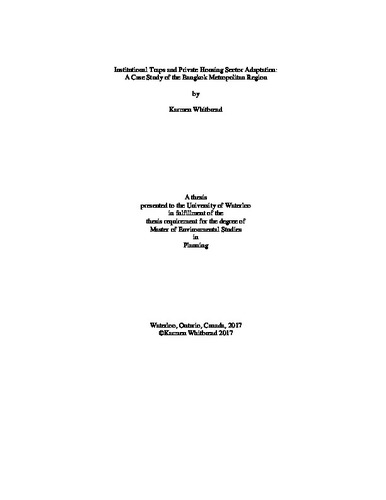 Southeast Asia is at particular risk of the impacts of climate change which is, and is predicted to continue, causing increased intensity and frequency of extreme weather events. Thailand is particularly vulnerable to these events, as well droughts. In 2011, Thailand experience the worst flood in 50 years, while four years later the county experienced the worst drought in 50 years, as well as continued flooding, particularly in parts of the Bangkok Metropolitan Region (BMR). Flood management, therefore, is a key aspect of Thai planning. Lebel et al. (2011), however, identified five institutional traps that hinder effective flood management—fragmentation, rigidity, elite capture, scale, and crisis management. These traps continue to hamper flood management strategies. Unfortunately, little is known about how these institutional traps impact water governance and non-government stakeholders. I interviewed public officials (n=23) and analyzed six newspapers, totalling 924 articles, on flood and drought management and the private housing sector in Thailand, and the BMR in particular. Results demonstrate that institutional traps continue to hinder effective flood and drought management in Thailand and have led to water mismanagement as well as a lack of trust in the government’s ability to effectively manage water resources. In turn, this has led to an increase in non-government actors engaging in flood and drought management, specifically the military, royalty, and the private sector. While the involvement of the military and royalty in flood and drought management are viewed positively by the media, the private sector received mixed reviews by the media and respondents. At times the private sector is praised for stepping in to provide flood and drought management techniques, but they are also recognised for acting disreputably. Due to the mixed evaluation of the private sector’s actions to address flood management issues, an in-depth review of the private housing sector’s actions to reduce the risk of flooding within the Bangkok Metropolitan Region (BMR) was undertaken. The BMR is especially vulnerable to intense rainfall due to its proximity to the coast and rapid urbanization. Drawing on the interviews with public officials (n=23), I review the current practices used by Bangkok’s private housing sector to adapt to the increased risk of floods in the city. Current adaptation strategies are primarily protective in nature, including: elevating land and constructing walls. These strategies can effectively reduce the risk of flooding to private property and adjacent properties, and may lead to co-benefits for networked urban infrastructures, such a stormwater management. Yet if these strategies are implemented poorly, they could be considered maladaptive by increasing the risk of flooding to surrounding properties and communities, and creating conflict between those who have adapted and those that have not. Overall, the results suggest that the private housing sector in the BMR is adapting to flooding. However, with limited government regulations, programs, or incentives, the adaptation process in the BMR is largely uncoordinated and unplanned. The results of this study demonstrate that poor flood management by the public sector can broaden water governance to other non-public stakeholders, with varying degrees of acceptance. Results indicate that the private housing sector, specifically, can be an effective mechanism to reduce the risk of urban flooding, but only if strong planning initiatives are implemented to manage their actions. Ultimately, this thesis contributes to the literature by outlining how institutional traps that hamper the public sector’s ability to effectively manage water resources can encourage a broadening of water governance; however, broader stakeholder involvement ought to be managed to ensure it is in the best interest of all.