"If You Believed Moses, You Would Believe Me": The Portrayal of Jesus as Interpreter of Scripture in John's Gospel 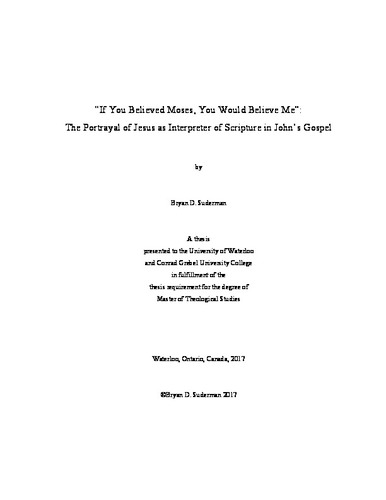 The use of scripture in John’s Gospel has been explored extensively by scholars. Less scholarly attention has been paid to the features and significance of the Fourth Gospel’s narrative depiction of Jesus himself as interpreter of scripture. This study offers an account of the portrayal of Jesus as interpreter of scripture in John’s Gospel through a close reading of selected passages that contribute most directly to that portrayal. Further, this study situates the Fourth Gospel’s portrayal of Jesus within the exegetical milieu of Early Judaism by providing a survey of portrayals of other scripture-interpreting characters in a range of literature from Jewish antiquity (Deuteronomy, Daniel, Philo, Qumran, Matthew’s Gospel, rabbinic literature). Using a five-part heuristic device drawn from my own reading of these texts and influenced by Hindy Najman’s account of “Mosaic Discourse” in the Second Temple period, I undertake a comparison of the Fourth Gospel’s portrayal of Jesus with the portrayals of scripture-interpreting characters in the surveyed works. The findings of this descriptive and comparative work are that the Fourth Gospel’s depiction of Jesus as interpreter of scripture is very much at home in the exegetical milieu of Jewish antiquity. There is little in Jesus’ use of scripture, as depicted in the Fourth Gospel, that cannot also be found in other Jewish literature of this era. And yet the cumulative effect of the Fourth Gospel’s depiction of its protagonist drawing upon scriptural passages and images overwhelmingly as a witness to his own identity is indeed unique in its rhetorical force and hermeneutical implications. John’s Gospel depicts Jesus not only as interpreter of the words of scripture, but as the very Word (Logos) of God made flesh. This portrayal, while drawing upon and exemplifying common elements of the exegetical milieu of Early Judaism, pushes beyond the boundaries of those elements in its depiction of Jesus.

Bryan Suderman (2017). "If You Believed Moses, You Would Believe Me": The Portrayal of Jesus as Interpreter of Scripture in John's Gospel. UWSpace. http://hdl.handle.net/10012/11185