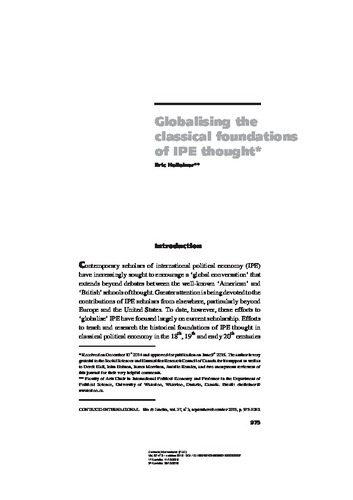 Current efforts to teach and research the historical foundations of IPE thought in classical political economy in the 18th, 19th and early 20th centuries centre largely on European and American thinkers. If a more extensive 'global conversation' is to be fostered in the field today, the perspectives of thinkers in other regions need to be recognised, and brought into the mainstream of its intellectual history. As a first step towards 'globalising' the classical foundations of IPE thought, this article demonstrates some ways in which thinkers located beyond Europe and the United States engaged with and contributed to debates associated with the three well-known classical traditions on which current IPE scholarship often draws: economic liberalism, economic nationalism and Marxism. It also reveals the extensive nature of 'global conversations' about IPE issues in this earlier era.