The Limits of Incrementalism: The G20, the FSB, and the International Regulatory Agenda 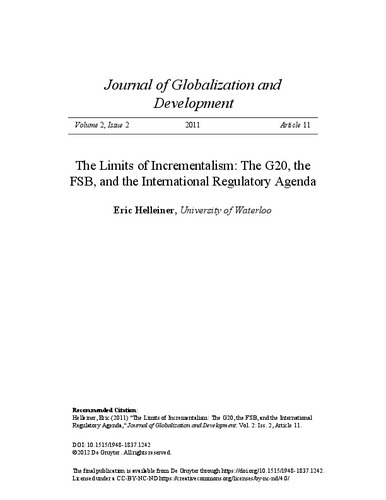 At their very first summit in Washington in November 2008, the G20 leaders placed the reform of international financial regulation at the core of their agenda. The issue has retained a central place in discussions and communiqués at every subsequent meeting. It has been remarkable to see heads of state commit such detailed attention in their communiqués to a topic which has historically been the more obscure preserve of technocratic officials. Equally striking has been the fact that policymakers have looked beyond the immediate task of managing the crisis to focus on this more forward-looking agenda to prevent future crises. It took more than a decade after the crisis of the early 1930s for political leaders to agree at the 1944 Bretton Woods conference on international financial reforms designed to prevent a repetition of that economic calamity. This time around, the crisis has been used as an immediate catalyst for reform. But what have the G20 leaders actually accomplished so far in this field? There is no question that they have successfully negotiated more initiatives in this area than in any other, initiatives that are aimed at reforming both the content and the governance of international financial regulation. While the breadth of these reforms has been impressive, they also suffer from some important limitations. Despite the scale of the crisis, the reforms have been much more incremental than radical. Their implementation has also been slow and uneven, and some important issues have been neglected entirely. As we have entered a new phase of financial instability unleashed by the eurozone’s difficulties, these limitations have become increasingly evident, with political consequences that are very difficult to predict.