The Depiction of Unwritten Law 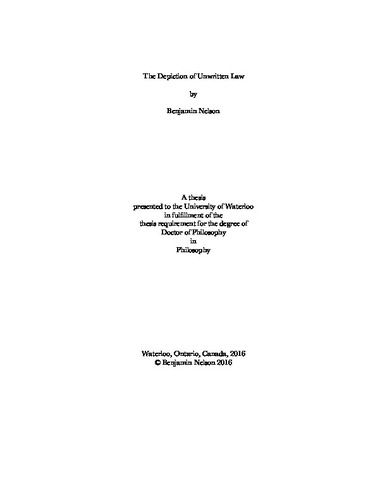 Even though tacit legal norms are deeply important to our past, present, and future, the very idea of unwritten law has been difficult to pin down, and problematic in a range of ways. Existing discussions of the phenomenon fall short of adequacy on one of several fronts: either they have focused on describing the normative features of one kind of unwritten law, or completely conflated the study of unwritten law with natural law, or else offered examinations of unwritten social rules, focussing on (mere) custom, ethics, and/or etiquette. A particular defect is the fact that unwritten law has not been given a treatment by those working in the tradition of analytical jurisprudence. My thesis introduces a novel means of analyzing and explicating the elusive concept of unwritten legal rules, striving thereby to advance the state-of-the-art. In what follows I argue that unwritten laws are informally publicized rules held on the threat of formal sanction by an appropriate political authority. I argue that a law is informally disseminated just in case the appropriate governing theory of law, known to subjects, provides those subjects with a set of instructions about who to defer to concerning the contents of the law, absent dissemination in official venues. I propose that there are at least five potential kinds of unwritten law routinely recognized in legal studies: operations, implicit constitutions, justice norms, fiat rules, and secret laws. Through careful examination of extant theories of law (Aquinas, Hobbes, Foucault, Marx, Austin, Fuller, Hart, and Dworkin), I argue that there are identifiable structural features of the contents of these theories that make them more or less likely to endorse the legal validity of each kind of unwritten law. Throughout the course of the dissertation, I show how we are able to diagnose the ways in which these structural features of our theories of law differentially support the validity of—and shed important, additional light upon—each potential variety of unwritten law.