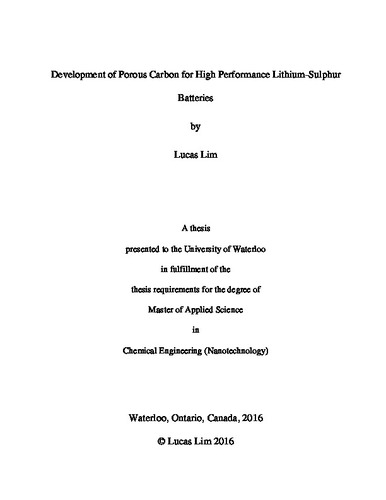 In recent years we have seen an enormous increase in electronic device capabilities as users demand new and improved features in a smaller form factor. As a result, the power demands of these electronics are increasing at an exponentially large rate such that lithium ion-battery (LIB) technology is rapidly becoming obsolete. Tesla motors and other electric vehicle manufacturers are pushing the limit of their technology as vehicles approach 300 miles per charge. Subsequently, battery technology must evolve in tandem with the rapid improvements made on current technology. The lithium-sulphur battery (LIS) stands as a promising candidate for future energy storage needs. As an old technology thought to be too difficult to implement, LIS technology has been rediscovered as researchers across the globe race to successfully implement this technology. A typical LIS consists of a lithium anode and sulphur cathode. The sulphur component allows for increased energy density over LIB technology. Sulphur is capable of bonding to lithium at much greater ratios than LIB cathodes.With a theoretical energy density five times higher than that of LIB, LIS has the potential to replace LIB as the new energy storage standard. In order to successfully implement LIS, several inherent shortcomings must be properly dealt with. Firstly, sulphur is an insulating material, effectively restricting electronic movement towards reaction areas in the cell. Secondly, the deposition of sulphur based by-products due to the electrochemical reactions which occur between lithium and sulphur create highly insulating areas resulting in poor electrochemical performance. Attempts to remedy these issues typically take form as modifications to select components of the battery, namely the composition or structure of the electrolyte, electrodes and the separator.It has been shown that nanoporous carbon materials are an excellent cathode option for increasing LIS battery performance as a result of increased sulphur uptake and decreased PS diffusion. This thesis will describe the development of a porous, carbonaceous material to be used as the cell cathode to improve performance. Herein, carbon spheres were synthesized as the cathode material sulphur host. These spheres are approximately 500nm in diameter and are air treated to greatly increase pore volume to promote PS retention and increase sulphur loading. The assembled cell using the air treated sample was shown to have a capacity of approximately 1100 mAh g^-1 with an 81% capacity retention versus the non-treated sample with a capacity of 700 mAh g^-1 and 68% retention.