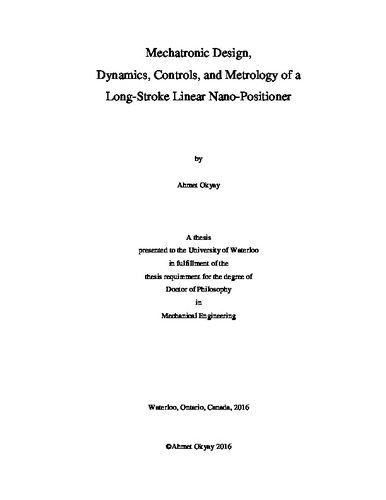 Precision motion systems find a broad range of application in various fields such as micro/nano machining tools, lithography scanners, testing and metrology machines, micro-assembly, biotechnology, optics manufacturing, magnetic data-storage, and optical disk drives. In this thesis, an ultraprecision motion stage (nano-positioner) is designed and built based on the concept of a low-cost desktop precision micro machine tool. Linear positioning performance requirements of such a machine tool are used as design objectives. The nano-positioner’s mechatronic design is carried out in such a way to integrate different components towards high performance in terms of high dynamic range, high feedrate, servo accuracy, and geometric accuracy. A self-aligning air-bearing/bushing arrangement is employed for frictionless motion with infinite theoretical resolution, as well as reduced assembly costs and footprint. The air discharge from the air bearings/bushings are also utilized for assistance in the removal of heat dissipated from actuator coils. A voice coil actuator (VCA) is chosen for continuous, non-contact operation, and designed from scratch. A number of dimensional variables of the cylindrical VCA are set according to required forces, motion range, production/assembly tolerances, magnet availability, leakage flux, etc. The remainder of variables is determined according to two novel optimization objectives defined independent of the coil wire gauge, which separately aim for maximum stage acceleration capacity and minimum heat generation per generated force. The actuators are operated in a complementary double configuration for control simplicity which allows for a straightforward and robust design for controller stability. Controller design is carried out at current control and position control levels. Current frequency response of the voice coil actuators is obtained, and they are observed to possess additional high frequency dynamics on top of the expected first order lumped resistance and inductance model. These are attributed to the eddy currents in the stator structure. A closed loop bandwidth of better than 907 [Hz] is achieved using the integrator plus lead current controller. The position controller is designed using the identified overall plant which includes the moving body, current dynamics and the force response. The lead-lag position controller is tuned at 450 [Hz] cross-over frequency and 40 [deg] phase margin. The control error during the tracking of a step trajectory filtered at 40 [Hz] is found to vary between ±5 [nm], indicating a 4 million dynamic range over the 20 [mm] stroke length. Dynamic Error Budgeting (DEB) method has been used to resolve the components of the error, and the largest contributor is found to be the sensor noise. The actual positioning error, which is an ideal signal excluding sensor noise is estimated using the same methodology and disturbance models, and it is found to be 0.680 [nm] root-mean-square (RMS). For the trajectory following case, experiments are carried out with and without a compensation scheme for encoder quadrature detection errors. The compensation is observed to reduce the ±45 [nm] control error to ±15 [nm]. For the assessment of stage performance and the verification of design choices, modal testing and laser interferometric metrology have been applied to the linear nano-positioner. For modal testing, two independent methods are used and their predictions are compared. In the first method, a graphical approach, namely the peak-picking method, is employed to identify modal parameters (natural frequency and damping ratio) and mode shapes. In the second method, a modal testing software package is used to identify the same using automated algorithms. The first mode, which is the most critical one for controller design, is identified at 65 [Hz] as a roll mode, followed by horizontal, vertical, and pitch modes at 450, 484, and 960 [Hz], respectively. The geometric errors of the system are identified using laser interferometric measurements, using various optical setups for linear and angular components. An error budget is formed using these results, together with the estimated thermal errors and servo errors. The accuracy of the stage is determined to be ±5.0 [μm], which had a ±1.1 [μm] non-repeatable component. In the future, the controller structure can be enhanced with an additional pole beyond the crossover frequency, in order to suppress unnecessary oscillations of the control effort signal around the set point due to the encoder noise transmitted to the controller input. Using an estimation of air bearing pitch stiffness from the catalogue values for normal stiffness, the roll mode was predicted at 672 [Hz]. The much lower natural frequency for that mode identified in modal testing (65 [Hz]) can be attributed to the shortcomings of the estimation method, primarily the neglect of the distortion of the supporting air cushion at the bearing interface due to out of plane rotations. In the future, experimental data can be obtained to characterize the air bearing pitch stiffness more accurately. It was observed that the preferred compensation scheme for the encoder quadrature detection errors is unable to match third and fourth harmonics of the encoder measurement error sufficiently. In the future, better compensation methods can be investigated for an improved match. During laser interferometric measurements, measurement uncertainty due to laser beam misalignment and air turbulence were inferred to be high. In the future, better ways to align the laser with the optics, as well as methods for improved assessment and compensation of environmental effects can be investigated.