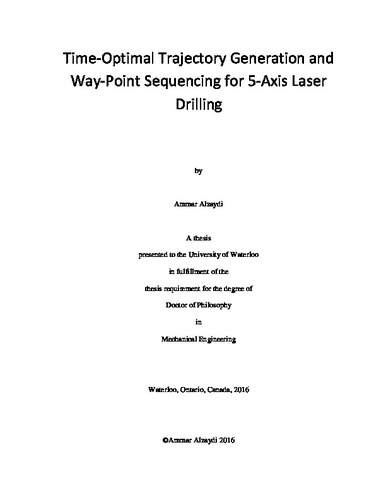 Laser drilling provides a highly productive method for producing arrays of holes on planar and freeform shaped components. Industrial applications include fuel injection nozzles, printed circuit boards (PCB’s), inkjet printer heads, pinholes and slits for scientific instrumentation, high-resolution circuitry, sensors, fiber-optic interconnects, medical devices, and gas turbine combustion chamber panels. This thesis deals with time-optimal trajectory planning for two mainstream laser drilling methods: on-the-fly drilling and percussion drilling, which are used in the aerospace industry. The research has been conducted in collaboration with the Canadian aero-engine producer, Pratt & Whitney Canada (P&WC). The algorithms developed have been tested in a target application involving the laser drilling of cooling hole arrays on gas turbine engine combustion chamber panels. On-the-fly drilling is an operation in which each hole receives one low powered shot at a time while the workpiece is in motion, and the beam focal point is continuously proceeding to the next hole location. The positioning sequence repeats itself until all holes are gradually opened up in small increments. Each hole location has ample time to cool down before the next shot is received. Thus, this process can yield favorable material properties in terms of preserving the desired crystal structure, and also hole quality in terms of dimensional (size) and form (shape) accuracy, due to the reduction of local thermal loading. However, there is no existing trajectory planner, in industry, or in literature, capable of generating time-optimized positioning trajectories for on-the-fly laser drilling. This thesis studies this problem and presents a new algorithm, capable of handling 5 degree-of-freedom (axis) positioning capability. The ability to generate spline-based smooth trajectories is integrated within a Traveling Salesman Problem (TSP) type sequencing algorithm. The sequencing algorithm optimizes both the order of the waypoints (i.e., hole locations) and also the timing levels in between, which affect the temporal (time-dependent) nature of the motions commanded to the laser drilling machine’s actuators. Furthermore, the duration between consecutive holes has to be an integer multiple of the laser pulsing period, considering a machine configuration in which the laser is firing at a constant frequency, and unused pulses are diverted away using a quick shutter. It is shown that the proposed algorithm is capable of generating 17-25% reduction in the beam positioning time spent during a manufacturing cycle, compared to some of the contemporary practices in industry. 17% reduction in the vibrations induced onto the laser optics is also observed, which helps prevent downtime due to the optics hardware gradually losing alignment. The second type of laser drilling operation for which optimized 5-axis trajectory planning has been developed is percussion drilling. In this process, a series of pulses are sent to each hole while the part is stationary. Once the hole is completely opened up, then positioning to the next hole proceeds. While percussion drilling is less advantageous in terms of local thermal loading and achievable part quality, it is used extensively in industry; due to its simplicity of automation compared to on-the-fly drilling. Thus, a TSP-style trajectory planning algorithm has also been developed for percussion laser drilling. The novelty, in this case, is concurrent planning of 5-axis time-optimal point-to-point movements within the sequencing algorithm, and direct minimization of the total travel time, rather than just distance (in two Cartesian axes); as is the method for which significant portion of TSP solvers and trajectory planners in literature have been developed. Compared to currently applied methods at P&WC, 32-36% reduction in the beam positioning time has been achieved. Also, 39-45% reduction in the peak magnitude of vibration has been realized. Limited benchmarking with state-of-the-art TSP solvers from combinatorial mathematics, considering only 2-axis Euclidean distance as the objective function, indicate that the proposed sequencing algorithm for percussion drilling is sub-optimal by 9-12%. Thus, it can still use further improvement in future research. Nevertheless, the two trajectory planners that have been developed in this thesis for on-the-fly drilling and percussion drilling have experimentally demonstrated very promising improvements in terms of motion time and smoothness. As more advanced Computer Numerical Control (CNC) systems and laser control electronics with deterministic execution and rapid synchronization capability become available, such algorithms are expected to facilitate significant production gains in laser drilling processes used in different industries.