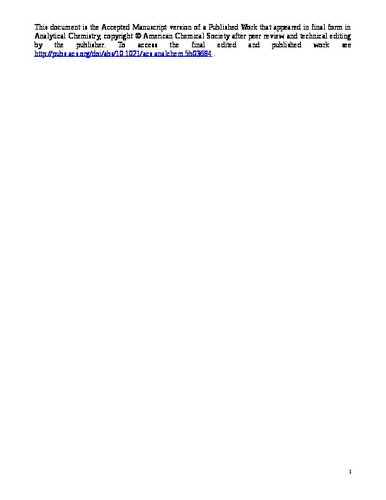 For the first time, an in vivo sampling mode of direct immersion–solid phase microextraction (DI-SPME) was employed to capture the metabolome of living plant specimens, using apple (Malus × domestica Borkh.) as a model system. Metabolites were extracted from apple tissues and introduced by thermal desorption into a comprehensive two-dimensional gas chromatography–time-of-flight mass spectrometry instrument. The feasibility of this sampling approach, based on exploitation of microextraction principles, including negligible depletion of free analyte concentrations, solventless sampling and sample preparation, and on-site compatibility, was determined in global metabolite analysis. Rather than adopting an approach of traditional sample preparation, requiring metabolism quenching and laborious sample preparation, the objective of the study was to capture the metabolome in vivo, evaluate the feasibility of the approach to provide unbiased extraction coverage, and compare analytical precision when different SPME sampling modes are employed. The potential of in vivo DI-SPME in quantitative plant metabolomics was assessed by evaluating changes in metabolic fingerprints in response to fruit maturation. The in vivo SPME sampling approach has been demonstrated as capable of sampling living systems with high reproducibility, considering that nearly 50% of hundreds of evaluated compounds included in the determination of analytical performance met the 15% RSD FDA criterion. Esters were extracted with high repeatability (% RSD for hexyl butanoate and butyl butanoate of 16.5 and 5.9, respectively, from 9 determinations in 3 apples) and found to be upregulated in response to apple fruit maturation.