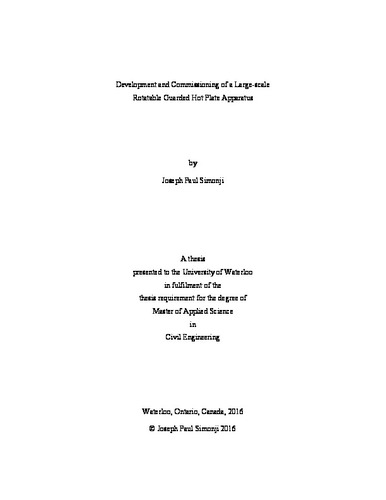 A large-scale guarded hot plate apparatus was designed and constructed for measurement of the thermal conductivity of thick insulation specimens and specimens containing layers and/or complex 3D heat flows (i.e. thermal bridges). The apparatus is capable of accepting specimens measuring 4’ (1219mm) by 4’ (1219mm) and up to 16” (406mm) thick with good accuracy in measurement. Computer models were developed to estimate heat flow errors important for determining the characteristics and limitations of the apparatus. Other sources of error in measurement were also evaluated. Once constructed, the apparatus was validated against a heat flow meter calibrated to better than 1% using a US National Institute of Standards and Technology (NIST) traceable calibration sample. Good agreement was shown between the heat flow meter and the guarded hot plate; <1% deviation in thermal conductivity measurement was observed for a 3” (76mm) thick stonewool specimen and <3.5% deviation in thermal conductivity measurement was observed for a 9” (229mm) thick stonewool specimen. The capability of the guarded hot plate to measure layered specimens with thermal bridges was demonstrated through the measurement of three specimens resembling typical wall assemblies. Measurements from the apparatus were compared against results from computer models and good agreement was found. Errors normally associated with the measurement of non-homogenous specimens in guarded hot plates were not found to be an issue.