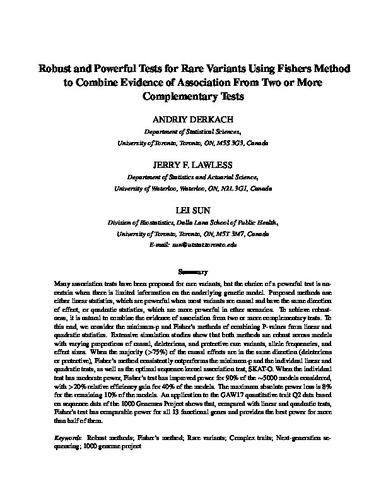 Many association tests have been proposed for rare variants, but the choice of a powerful test is uncertain when there is limited information on the underlying genetic model. Proposed methods use either linear statistics, which are powerful when most variants are causal and have the same direction of effect, or quadratic statistics, which are more powerful in other scenarios. To achieve robustness, it is natural to combine the evidence of association from two or more complementary tests. To this end, we consider the minimum-p and Fisher’s methods of combining P-values from linear and quadratic statistics. Extensive simulation studies show that both methods are robust across models with varying proportions of causal, deleterious, and protective rare variants, allele frequencies, and effect sizes. When the majority (>75%) of the causal effects are in the same direction (deleterious or protective), Fisher’s method consistently outperforms the minimum-p and the individual linear and quadratic tests, as well as the optimal sequence kernel association test, SKAT-O. When the individual test has moderate power, Fisher’s test has improved power for 90% of the 5000 models considered, with >20% relative efficiency gain for 40% of the models. The maximum absolute power loss is 8% for the remaining 10% of the models. An application to the GAW17 quantitative trait Q2 data based on sequence data of the 1000 Genomes Project shows that, compared with linear and quadratic tests, Fisher’s test has comparable power for all 13 functional genes and provides the best power for more than half of them.