Mechano-chemical synthesis of amorphous manganese borohydride, the effect of catalytic additives on its hydrogen generation properties, and crystallization during solvent extraction 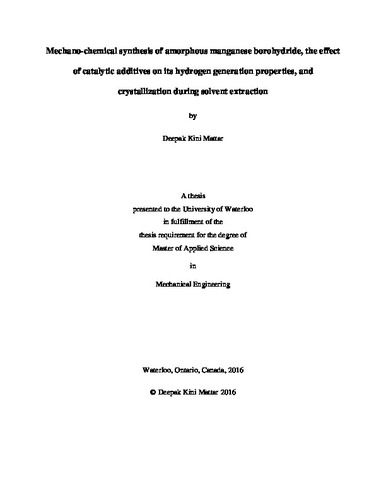 Thesis, including all supplementary sections (7.763Mb)

Abstract This thesis forms one of the final parts of an extended study on the hydrogen storage and generation properties of metal borohydrides. Manganese borohydride, Mn(BH4)2, which is expected to be formed by the mechano-chemical activation synthesis (MCAS) from a mixture of sodium borohydride, NaBH4, and manganese chloride, MnCl2, is the candidate explored in this thesis. The effect of catalytic additives graphene and ultrafine filamentary carbonyl nickel (Ni), in addition to lithium amide (LiNH2) is also studied. The mixture of (2NaBH4+MnCl2) was ball milled in a magneto-mill. No gas release was detected. The XRD patterns of the ball milled mixture exhibit only the Bragg diffraction peaks of NaCl-type salt which on the basis of the X-ray diffraction results reported in the literature is possibly identified as a solid solution Na(Cl)x(BH4)(1-x), possessing a cubic NaCl-type crystalline structure. No presence of any crystalline hydride was detected by powder X-ray diffraction which clearly shows that NaBH4 in the initial mixture must have reacted with MnCl2 forming a NaCl-type by-product and another hydride that does not exhibit X-ray Bragg diffraction peaks. Mass spectrometry (MS) of gas released from the ball milled mixture during combined thermogravimetric analysis/differential scanning calorimetry (TGA/DSC) experiments, confirms mainly hydrogen (H2) with a small quantity of diborane gas, B2H6. The Fourier transform infra-red (FT-IR) spectrum of the ball milled (2NaBH4+MnCl2) is similar to the FT-IR spectrum of crystalline manganese borohydride, c-Mn(BH4)2, synthesized by ball milling which strongly suggests that an amorphous a-Mn(BH4)2 hydride was formed. The catalytic additives of 5 wt. % graphene and ultrafine filamentary nickel added before ball milling significantly improved the dehydrogenation characteristics of the mixture. The addition of graphene suppressed the formation of B2H6. The powder mixture desorbed ~3 wt. % H2 after 24 hours at 120°C. 5 wt. % lithium amide, LiNH2, when added before ball milling changed the nature of the dehydrogenation reaction from endothermic to exothermic and almost completely eliminated the release of diborane. This powder mixture desorbed ~3 wt. % H2 after 24 hours at 140°C. The highlight of this work is the crystallization of likely amorphous Mn(BH4)2 produced after MCAS without additives during the subsequent filtration/extraction process and the generation of ~7.5 wt. % of H2 by this powder, which has never before been reported in literature.