Acceptance of Commercially Available Wearable Activity Trackers Among Adults Aged Over 50 and With Chronic Illness: A Mixed-Methods Evaluation 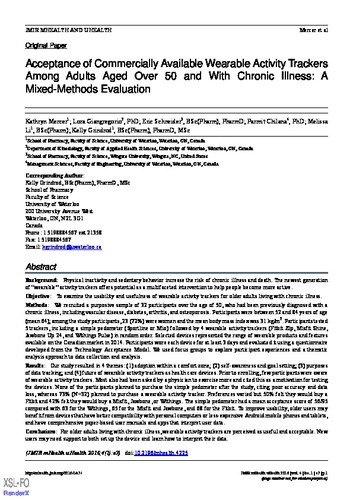 Background: Physical inactivity and sedentary behavior increase the risk of chronic illness and death. The newest generation of “wearable” activity trackers offers potential as a multifaceted intervention to help people become more active. Objective: To examine the usability and usefulness of wearable activity trackers for older adults living with chronic illness. Methods: We recruited a purposive sample of 32 participants over the age of 50, who had been previously diagnosed with a chronic illness, including vascular disease, diabetes, arthritis, and osteoporosis. Participants were between 52 and 84 years of age (mean 64); among the study participants, 23 (72%) were women and the mean body mass index was 31 kg/m2 . Participants tested 5 trackers, including a simple pedometer (Sportline or Mio) followed by 4 wearable activity trackers (Fitbit Zip, Misfit Shine, Jawbone Up 24, and Withings Pulse) in random order. Selected devices represented the range of wearable products and features available on the Canadian market in 2014. Participants wore each device for at least 3 days and evaluated it using a questionnaire developed from the Technology Acceptance Model. We used focus groups to explore participant experiences and a thematic analysis approach to data collection and analysis. Results: Our study resulted in 4 themes: (1) adoption within a comfort zone; (2) self-awareness and goal setting; (3) purposes of data tracking; and (4) future of wearable activity trackers as health care devices. Prior to enrolling, few participants were aware of wearable activity trackers. Most also had been asked by a physician to exercise more and cited this as a motivation for testing the devices. None of the participants planned to purchase the simple pedometer after the study, citing poor accuracy and data loss, whereas 73% (N=32) planned to purchase a wearable activity tracker. Preferences varied but 50% felt they would buy a Fitbit and 42% felt they would buy a Misfit, Jawbone, or Withings. The simple pedometer had a mean acceptance score of 56/95 compared with 63 for the Withings, 65 for the Misfit and Jawbone, and 68 for the Fitbit. To improve usability, older users may benefit from devices that have better compatibility with personal computers or less-expensive Android mobile phones and tablets, and have comprehensive paper-based user manuals and apps that interpret user data. Conclusions: For older adults living with chronic illness, wearable activity trackers are perceived as useful and acceptable. New users may need support to both set up the device and learn how to interpret their data.